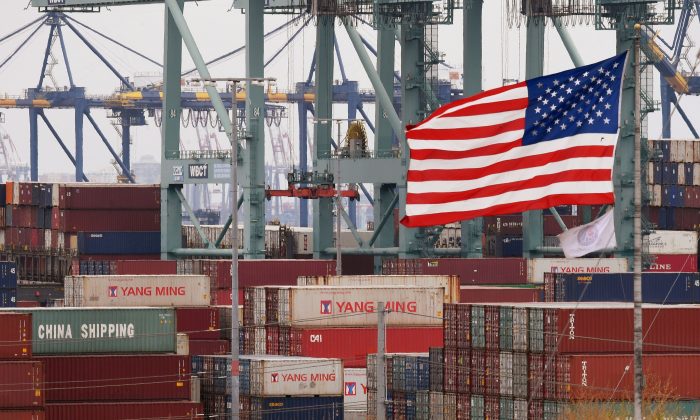 Chinese shipping containers beside a U.S. flag at the Port of Los Angeles in Long Beach, Calif., on May 14, 2019. (Mark Ralston/AFP/Getty Images)
Trump Administration

The United States has collected some $16 billion in tariffs imposed on Chinese imports by President Donald Trump.

The number is based on duties assessed by the Customs and Border Protection (CBP) by May 1, the agency’s spokesperson said via email.

The tariffs have been imposed gradually since July 6, 2018, on $250 billion worth of annual Chinese imports as Trump tries to squeeze the most favorable trade deal out of ongoing negotiations with China.

Trump has since hiked the tariffs even further after he said the Chinese reneged on a nearly finished deal. China has issued retaliatory tariffs, but since it imports dramatically less from the United States than vice versa, it holds weaker leverage.

Trump has said he will use some of the tariff money to compensate U.S. farmers for losses incurred due to China’s retaliation.

In addition to the tariffs specifically aimed at China, the CBP has also assessed on May 1 more than $1.6 billion in Trump’s tariffs on aluminum, more than $5.1 billion in his steel tariffs, and nearly $750 million in tariffs he put on solar panels. Chinese products have also been significantly affected by these tariffs.

Trump has for years proposed using tariffs as a cudgel to force China and other trading partners into rebalancing trade relations. He’s criticized China in particular for underhanded practices, such as forced technology transfer from foreign companies, theft of U.S. intellectual property, and currency manipulation.

Next, he put a 25 percent tariff on steel and 10 percent on aluminum, effective March 23, 2018. Canada, Mexico, the European Union, Australia, Argentina, Brazil, and South Korea received exemptions from the tariffs, but Canada, Mexico, and the EU lost their exemptions on May 31, 2018. Trump agreed to lift the tariffs from Canada and Mexico on May 17, 2019.

By Oct. 2, 2018, the CBP had already assessed $4.4 billion in the steel, aluminum, and China tariffs, the Washington Examiner reported.

Tariffs on the $200 billion in Chinese goods were to increase to 25 percent on Jan. 1, but Trump postponed the hike to give room for negotiations, which, he said, were progressing well at the time.

Yet, as the deal was nearing completion, Beijing backtracked on commitments to change its laws on key issues including forced technology transfer, theft of U.S. intellectual property, and currency manipulation, according to Reuters.

Trump alleged China is trying to wait him out, hoping he’ll lose the 2020 election and the next president will give China more favorable treatment.

On May 10, the tariffs on the $200 billion in Chinese goods increased to 25 percent.

Trump has also said tariffs will be placed on an additional $267 billion in Chinese goods, encapsulating nearly all imports from China. That means consumer goods like electronics and textiles, which have been spared so far, would likely be targeted, too.

Taxing Chinese products runs the risk of rising prices for U.S. companies and consumers buying the goods, increasing inflation, and suppressing job growth. But neither have materialized on the national level. Inflation has kept tame and unemployment dropped to 3.6 percent in April, the lowest in nearly half a century.

At least part of the reason for this is in the way the administration picked which products to target, according to a November 2018 report prepared for the European Network for Economic and Fiscal Policy Research.

The administration went after products with high-import elasticity, which means their buyers are sensitive to price and will likely forgo a buy if the price goes up. In such cases, the impetus is on the seller to keep the price down.

“Contrary to public opinion, the greatest share of the tariff burden falls not on American consumers or firms, but on Chinese exporters,” wrote Benedikt Zoller-Rydzek and Gabriel Felbermayr, authors of the report.

They estimated that, with a 25 percent tariff on $250 billion of Chinese goods, U.S. companies and consumers will see prices of those products going up by less than 5 percent on average, while Chinese firms will have to reduce their prices by nearly 21 percent.

Data from 2018 shows that Chinese companies tried to push most of the tariff costs on U.S. buyers, but have been able to sell less and less each month, based on a March study by economists from the Federal Reserve Bank of New York, Princeton University, and Columbia University (pdf). In December 2018, buyers appear to have been forced to bear about three-quarters of the tariff burden on the first $50 billion of targeted Chinese products, but only about a quarter of the tariffs on the subsequent $200 billion in targeted products.

In addition, China appears to try to use trade to hurt Trump politically. In 2018, it only imported some $3 billion worth of U.S. soy, down from more than $12 billion the year before. On the surface, that was because of China’s retaliatory 25 percent tariff on soy. In reality, the Chinese government has been buying the soy itself and selling it to Chinese companies, thus shielding them from the tariff costs, Kenneth Rapoza reported for Forbes.

Trump said he will use perhaps $6 billion to $10 billion of the tariff money to subsidize farmers hit by China’s trade measures.

“The farmers are going to be in great shape and it’s going to start taking place very soon,” he told Fox News in a May 19 interview.