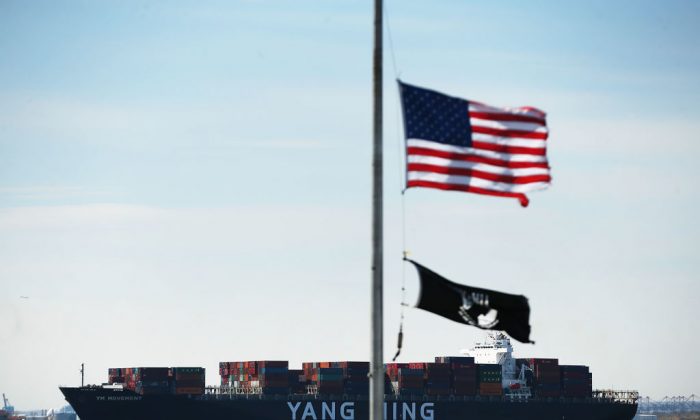 US Has All the Leverage to Press China in Trade Talks

The Trump administration has a unique moment to end China's trade and human rights violations, say experts
By Emel Akan

Trade tensions between Washington and Beijing continue to rise as the two sides retaliate against one another with new tariffs. The United States, however, has a unique opportunity now to press China to end its unfair trade practices and technology thefts, as well as human rights violations, say experts.

The United States has strong economic fundamentals and the largest consumer market in the world. It is the envy of the world, and the Trump administration has all the leverage, according to Stephen Moore, an economist at The Heritage Foundation and former economic adviser to Trump’s 2016 presidential campaign.

“We’re negotiating from a position of strength right now clearly because everybody wants access to the U.S. consumer market,” he told NTD, part of the Epoch Media Group.

U.S. economic growth is expected to reach 4 percent this year. Job openings surged to record-high levels, with vacancies exceeding the number of unemployed workers, and rising. The unemployment rate also fell to the lowest levels in 18 years.

Earnings surprises, a measure of by how much firms beat profit estimates, remain at all-time highs, according to JPMorgan Chase. This, coupled with strong economic fundamentals and the tax cuts, could support double-digit earnings growth this year, stated the bank.

Due to sluggish growth in other countries, the United States “is once again looking like the star performer,” said an article in The Wall Street Journal.

The pace of global growth is expected to decelerate over the next two years, according to the World Bank. And China’s economic expansion also has been slowing, with sluggish investment and household consumption. Increasing levels of corporate and local government debt are also a drag on economic growth.

“Trump really believes that this is the American moment. This is the time for us to flex our muscle and to really stop being taken advantage of,” Moore said.

The Trump administration on July 6 imposed tariffs on $34 billion in Chinese goods. The tariffs will apply to more than 800 goods, including machines, mechanical products, and cars.

China quickly retaliated with tariffs of its own. Trump warned that he would impose additional tariffs on $500 billion in trade, equivalent to all the goods that come from China.

Beijing has accused Washington of starting “the biggest trade war in economic history,” as the two sides retaliate with tariffs.

“We’ve been in a trade war for 10 or 15 years and we’re losing against China,” said Moore, adding that the United States has a right to retaliate to “level the playing field.”

“In the end, Donald Trump wants lower tariffs not higher tariffs,” Moore said. “He wants all the countries to lower their tariffs hopefully to zero so we have a true free trade paradise. But we’re a long way from that right now.”

In June, the Trump administration also slapped higher tariffs on steel and aluminum imports, which affect key allies, including the European Union, Canada, and Mexico.

“It would be a positive thing if Trump could focus his energies on China because China is really the country that matters the most economically and that I think has been the biggest cheater,” Moore said, adding that Washington should have like-minded allies by its side in the trade war with China.

Beijing wants to form a coalition with the EU against Washington, according to a Financial Times article. The Chinese regime is offering preferential treatment and expedited investment negotiations to the bloc.

However, the EU officials don’t want to be perceived as teaming up with China against the United States on trade, states the article. They share the Trump administration’s core concerns about China, such as intellectual property theft and forced technology transfers.

According to a Washington Post article, Sam Brownback, the U.S. ambassador for religious freedom, is urging the Trump administration to impose sanctions on Chinese politicians who are involved in the country’s attacks on faith groups.

As part of the proposal, Trump can issue an executive order asking the State and Treasury departments to freeze the bank accounts and other assets of Chinese officials involved in human rights violations.

Religious groups and minorities in China have been subjected to systematic arrests, unlawful imprisonment, brainwashing, and torture. More shocking is the forced organ harvesting from prisoners, which has become a multibillion-dollar industry.

The authors of a report on forced organ harvesting in China, “Bloody Harvest/The Slaughter: An Update,” say it is a genocide against Falun Gong practitioners, the primary source of organs.

China’s human rights record has been criticized for years, but now Trump has a rare opportunity to wield his influence during trade negotiations, states The Washington Post article.