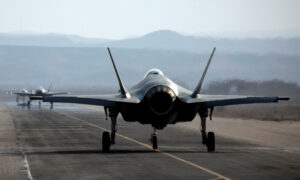 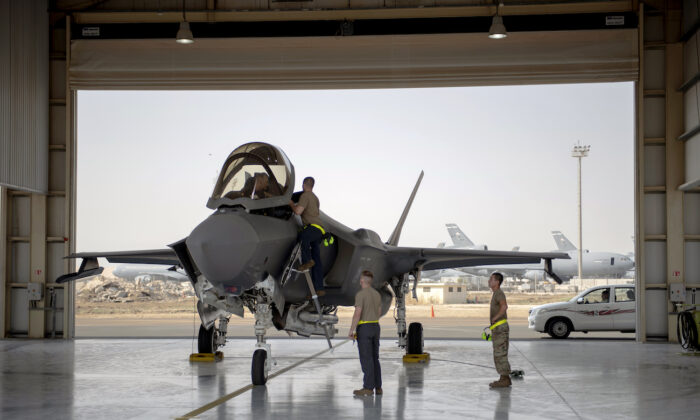 An F-35 fighter jet pilot and crew prepare for a mission at Al-Dhafra Air Base in the United Arab Emirates, on Aug. 5, 2019. (Staff Sgt. Chris Thornbury/U.S. Air Force via AP)
Executive Branch

US Halts Arms Sales Negotiated Under Trump Admin, Including F-35s to UAE

The Biden administration has temporarily halted pending arms sales to U.S. allies that were negotiated under the Trump administration, a U.S. State Department official said on Wednesday.

The department is pausing some pending U.S. defence transfers and sales under Foreign Military Sales and Direct Commercial Sales to allow the Biden administration time to review them, the official said.

“This is a routine administrative action typical to most any transition, and demonstrates the Administration’s commitment to transparency and good governance, as well as ensuring U.S. arms sales meet our strategic objectives of building stronger, interoperable, and more capable security partners,” the department said in a statement.

Among the paused deals is a transfer of F-35 fighter jets to the United Arab Emirates as part of a high-tech arms deal totalling some $23 billion. The approval of the sale to the UAE was announced to Congress in November 2020, for up to 50 F-35s worth $10.4 billion, up to 18 MQ-9B drones worth $2.97 billion, and a package of air-to-air and air-to-ground munitions worth $10 billion.

The White House under the Trump administration at the time said the sales support U.S. foreign policy and national security objectives by “enabling the UAE to deter increasing Iranian aggressive behavior and threats” following its recent peace deal with Israel.

In December 2020, Two Democrat-led measures to block the $23 billion sale to the UAE were rejected by the then GOP-majority Senate.

State Department officials didn’t identify other sales that had been temporarily put on hold. It is unclear whether an approved $2.37 billion in arms sales to Taiwan is among the sales paused for review.

The UAE ambassador to the United States, Ambassador Yousef Al Otaiba, said in a statement that the country was expecting the new administration to review current policies, and reflected on the significance of the F-35 package.

“Welcoming joint efforts to de-escalate tensions and for renewed regional dialogue, the UAE will work closely with the Biden Administration on a comprehensive approach to Middle East peace and stability. As in previous transitions, the UAE anticipated a review of current policies by the new administration,” he said.

“Specifically, the F-35 package is much more then [sic] selling military hardware to a partner,” he added. “Like the US, it allows the UAE to maintain a strong deterrent to aggression. In parallel with new dialogue and security cooperation, it helps to reassure regional partners.

He continued, “It also enables the UAE to take on more of the regional burden for collective security, freeing US assets for other global challenges, a long-time bipartisan US priority.”

“The UAE has always fought alongside the US. And through hundreds of joint missions and participation in six US-led Coalition efforts, we have learned that the key to military coordination is interoperability. With the same equipment and training, US and UAE forces are more effective together when and where it matters.”