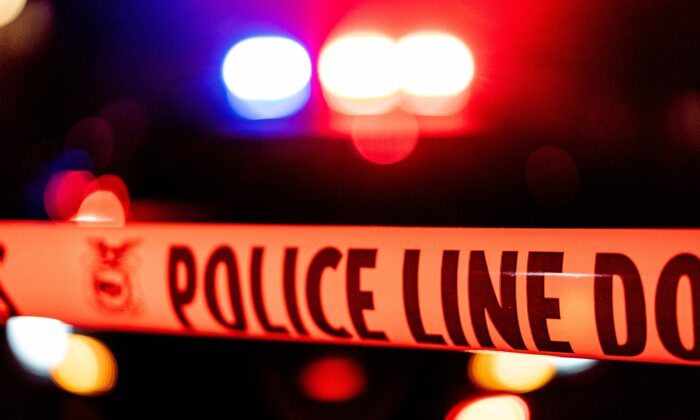 File photo of a police tape. (Andri Tambunan/AFP via Getty Images)
By Reuters

One person was killed and about 20 wounded on Halloween night in two separate shooting attacks in the U.S. cities of Kansas City and Chicago, police said.

Between five and seven people were shot and one was killed in a shooting at a home in Kansas City, where about 70–100 teens were partying on Monday night, city police chief Karl Oakman said.

Some individuals unknown to the homeowners started shooting when they were asked to leave, Oakman told reporters.

In Chicago, 14 people, including two children and a teenager, were injured in a drive-by shooting, but there were no immediate reports of deaths, Chicago police said.

Seven of the injured, including the three minors, were either in serious or critical condition.

Two shooters, traveling in a dark SUV, shot at a group which was standing at an intersection, police said. Thirteen were hit by gunfire while one was struck by a vehicle, police said, correcting an earlier statement which said that as many as 14 were shot.

Police did not identify the offenders or have any details of the motive, Chicago police superintendent David Brown told a press briefing.

The bloodshed follows a series of U.S. school shootings that have left dozens dead and wounded this year alone. One of the deadliest took place in May when a gunman killed 19 children and two adults in Uvalde, Texas.

By Anirudh Saligrama and Shubham Kalia