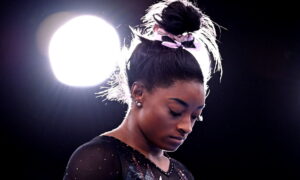 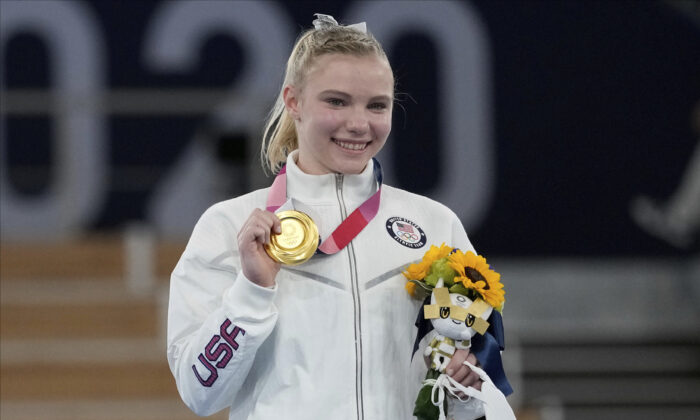 Jade Carey, of the United States, poses after winning the gold medal for the floor exercise during the artistic gymnastics women's apparatus final at the 2020 Summer Olympics in Tokyo, Japan, on Aug. 2, 2021. (Ashley Landis/AP Photo)
Tokyo 2020 Olympics

Team USA’s Jade Carey won gold in the floor gymnastics finals at the 2020 Olympics on Aug. 2, shortly after Simone Biles announced that she would compete in an event after dropping out of several others.

Carey, 21, of Arizona, edged Italy’s Vanessa Ferrari and Japan’s Mai Murakami for her first-ever Olympic medal. Carey rebounded from a disastrous vault final the day prior, missing the podium entirely.

“Coming back from a day like yesterday, I’m really proud of myself for being able to put that behind me and finish with probably the best floor routine I’ve ever done in my life,” she told reporters.

Team USA has medaled in every women’s event so far, but finished with silver in the all-around team final after Biles withdrew.

Biles, 24, of Ohio, said she was physically able to compete and withdrew because of mental health issues. She later blamed the “twisties,” a sports phrase referring to when one’s mind and body aren’t in sync.

She later withdrew from the individual all-around competition, the vault final, and the floor final, which Carey ended up winning.

But Biles plans to compete in the balance beam final on Aug. 3, according to USA Gymnastics.

“We are so excited to confirm that you will see two U.S. athletes in the balance beam final tomorrow—Suni Lee and Simone Biles!!” the group said in a statement. “Can’t wait to watch you both!”