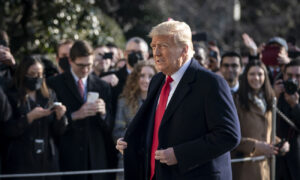 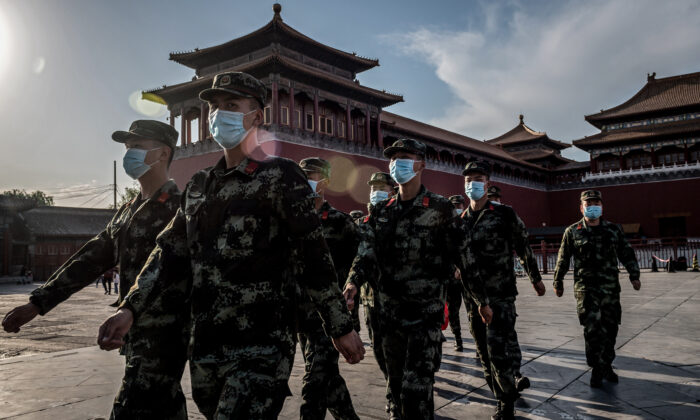 People's Liberation Army (PLA) soldiers march in front of the entrance of the Forbidden City in Beijing on May 19, 2020. (NICOLAS ASFOURI/AFP via Getty Images)
National Security

US Government Should Further Limit Investments in China: Panel

WASHINGTON—The Trump administration took swift action in its final months to ban investments in communist Chinese military companies, in an effort to curb Beijing’s access to the lucrative U.S. stock market. However, more work needs to be done to protect U.S. capital markets and critical technologies, according to a panel of China experts.

There’s a need to modernize U.S. laws and export controls, Nazak Nikakhtar, partner at law firm Wiley Rein LLP and former assistant secretary at the U.S. Department of Commerce, said on March 19 at a hearing by the U.S.–China Economic and Security Review Commission (USCC).

The United States should come to terms with the reality that business dealings with Chinese firms have aided the growth of China’s military-industrial complex for the past four decades, Nikakhtar said during her testimony.

“Maintaining the status quo cannot be our strategy going forward,” she said.

Nikakhtar said a recent analysis by the Commerce Department that’s based on publicly available data shows that U.S. public and private equity investments in Chinese- and Hong Kong-domiciled companies from 1992 through the end of 2020 totaled $2.3 trillion in market value.

U.S. investments in state-owned enterprises totaled more than $152 billion, while investments in companies that are tied to the People’s Liberation Army (PLA) totaled nearly $55 billion, the analysis shows.

“These facts refute the notion that prohibiting capital flows to China makes no difference,” Nikakhtar said. “Limiting capital will absolutely slow the growth of the Chinese military-industrial complex, and our initiatives may even prompt some of our allies to do the same.”

Former President Trump issued an executive order in November last year that prohibited investing in companies with ties to the PLA. The current ban covers 44 companies identified by the Pentagon as communist Chinese military companies (CCMCs).

Nikakhtar suggested that the U.S. Congress consider additional amendments to the National Defense Authorization Act to further improve the Pentagon’s CCMC designation authority, by expanding the definition of CCMCs.

In her testimony, she also stressed the existing challenges in identifying emerging technologies and recommended that the U.S. government “consider imposing licensing requirements for only exports of emerging technologies to entities and/or countries that pose the most significant national security risks.”

Many of the CCMC companies are publicly traded on stock exchanges around the world. Through public pension and retirement funds, Americans are transferring wealth to these blacklisted companies from the United States.

The largest index providers, MSCI and FTSE, have about 38 percent and 43 percent China allocation, respectively, in their emerging market indexes. Many exchange-traded funds (ETFs) and other passive investment funds benchmark their investments against these major indices.

Tolle’s company, which is an emerging market index provider, is the opposite because it’s freedom-weighted and hence excludes some of the autocratic countries such as China. The company’s equity strategy uses personal and economic freedom metrics as primary factors in the investment selection process.

“My company is here with the private market solution for investors who care about these issues,” Tolle said in her testimony, “but we are a very small drop in a very large, very deep ocean. And I can say with a high degree of confidence that policy solutions are needed if investments in Chinese companies are to be restricted in any meaningful way.”

Tolle also disagreed with people who claim that it’s impossible to do emerging markets indexing without China.

“It is possible. We do it, and ex-China ETFs do it,” she said. “Emerging markets have no shortage of securities that would easily meet minimum size and liquidity requirements for index inclusion.”

Following Trump’s executive order, the fund issuers and asset managers asked index providers to drop some of the blacklisted Chinese companies from their indexes.

Speaking at the hearing, LaFond said there are better channels of addressing the problem.