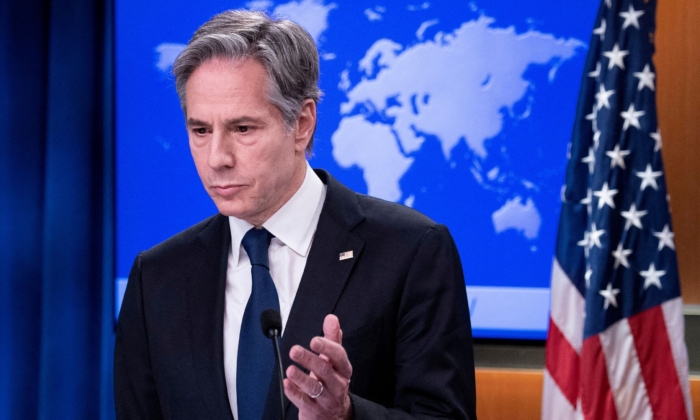 U.S. Secretary of State Antony Blinken speaks during a briefing at the State Department in Wash., on Jan. 26, 2022. (Brendan Smialowski/Reuters)
Russia-Ukraine War

US Officially Accuses Russia of Committing War Crimes in Ukraine

“Today, I can announce that, based on information currently available, the U.S. government assesses that members of Russia’s forces have committed war crimes in Ukraine,” Secretary of State Antony Blinken said in a statement.

“Our assessment is based on a careful review of available information from public and intelligence sources,” he said.

“As with any alleged crime, a court of law with jurisdiction over the crime is ultimately responsible for determining criminal guilt in specific cases,” Blinken said. “The U.S. government will continue to track reports of war crimes and will share information we gather with allies, partners, and international institutions and organizations, as appropriate.

“We are committed to pursuing accountability using every tool available, including criminal prosecutions.”

The consequences of such an assessment by the U.S. government aren’t yet clear.

Russian officials are likely to bristle at the latest accusation. Earlier this week, Russia’s Ministry of Foreign Affairs warned that a claim made by President Joe Biden that criticized Russian President Vladimir Putin is straining U.S.–Russia relations.

Russia’s Foreign Ministry told Ambassador John Sullivan that “such statements from the American president, unworthy of a statesman of such high rank, put Russian–American relations on the verge of breaking,” according to a translated statement posted online.

The United States and Europe have already levied heavy sanctions against Russia’s economy, and the Biden administration is considering more, as the president meets with NATO’s leadership in Brussels this week, officials have said. International corporations have said they will no longer do business in Russia because of the conflict.

While the International Criminal Court (ICC) in the Netherlands said it’s gathering evidence about any potential war crimes in Ukraine, Russia—like the United States—doesn’t recognize the court’s jurisdiction. The U.N. Office on Genocide Prevention and the Responsibility to Protect separates war crimes from genocide and crimes against humanity.

Meanwhile, as of March 23, Russia’s invasion force has stalled in some areas and Ukrainian resistance has thwarted its hopes for a swift victory. Russian artillery and airstrikes have maintained their bombardments on several cities, while civilians who have been unable or unwilling to flee have sought shelter underground.

Putin also announced that Russia would switch certain gas sales to rubles, sending European futures soaring on concerns that the switch will exacerbate the region’s energy crunch and jam up deals that run to hundreds of millions of dollars every day.

“Russia will continue, of course, to supply natural gas in accordance with volumes and prices … fixed in previously concluded contracts,” Putin said on March 23.