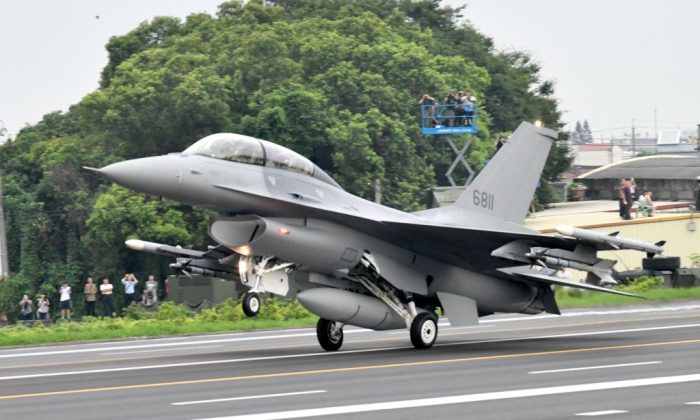 An F-16V fighter jet lands on the freeway in Changhua county, central Taiwan, during the 35th Han Kuang drill on May 28, 2019. (Sam Yeh/AFP/Getty Images)
US-China Relations

TAIPEI, Taiwan—Taiwan’s air defenses are set for a major upgrade as the United States plans to sell it 66 F-16V fighter jets worth $8 billion.

Taiwan President Tsai Ing-wen, while answering reporters’ questions following a visit to a local tech company in the city of Taichung on Aug. 17, said the arms purchase is an “energy boost in national capability … for the purpose of maintaining peace,” according to local media.

“Only when we are capable of self-defense can we guarantee that such peace be continued,” Tsai added. She also expressed her gratitude to the U.S. government for the deal.

Taiwan’s defensive capabilities are chiefly to guard against the Chinese regime, which considers the self-ruled island a renegade province, to be united with the mainland in the future, with military force if necessary.

The United States, after severing official diplomatic ties with Taiwan in recognition of Beijing in 1979, has maintained a non-diplomatic relationship with the island, based on the Taiwan Relations Act, under which the former has continually sold military weapons and equipment to Taiwan—to the disapproval of the Beijing regime.

On Aug. 16, the Washington Post first reported that that the U.S. government approved the transaction, citing several unidentified U.S. officials. The report stated that the U.S. State Department submitted the deal for informal review to Congress late on Aug. 15.

The purchase of the U.S. fighter jets is a necessity, considering that the island is under direct threat from Beijing, which has regularly conducted military drills by flying Chinese jets to encircle Taiwan, in addition to long-range flight exercises, Taiwan’s Air Force Command Headquarters explained in a Facebook post on Aug. 16.

The air force noted that Beijing has conducted four encirclement drills in 2016, but the number jumped to 34 the following year. In 2018, there were 13 such drills.

Taiwanese lawmaker Tsai Shih-ying, writing on his personal Facebook page on Aug. 17, explained that the new F-16V fighter jets would work seamlessly within the current air force, since Taiwan had recently begun upgrading its existing F-16s.

Taiwan’s state-owned aerospace company Aerospace Industrial Development Corp. (AIDC) is currently upgrading the island’s fleet of F-16A/B jets to become F-16V, and the first of these retrofitted jets was handed to Taiwan’s air force in October 2018.

The new orders of the F-16V variant is equipped with an advanced, multi-functional radar system known as AESA, enhanced avionics, a more powerful thrust engine, and upgraded mission computers and cockpit dashboards, according to Lockheed Martin, the U.S. manufacturer.

The U.S. government’s arms sales, including the sales of fighter jets, is for the purpose of preventing a conflict across the Taiwan Strait, according to Rick Fisher, a senior fellow on Asian military affairs at the Virginia-based think tank International Assessment and Strategy Center. He is also a regular contributor to The Epoch Times.

“The regime in Beijing, the Chinese Communist Party red regime, wants to kill the democracy on Taiwan. The rest of the world opposes this. And by selling weapons to Taiwan, the United States is reducing the chance that the regime in Beijing will start a war,” Fisher said in an Aug. 17 interview with New York-based broadcaster NTD, an affiliate of The Epoch Times.

Taiwan had been seeking to buy advanced U.S. fighter jets for years. The last fighter jet sale was in 1992, when then-President George H.W. Bush announced the sale of 150 F-16A/B jets to the island. In 2011, the Barack Obama administration rejected Taiwan’s request to buy F-16C/D fighter jets, but agreed to a package to upgrade the island’s existing F-16A/B jets.

“The sale of F-16s to Taiwan sends a strong message about the U.S. commitment to security and democracy in the Indo-Pacific,” Engel and McCaul said in a joint statement.

“As the Chinese government and Communist Party seeks to extend its authoritarian reach in the region, it is critical that the United States continue to enhance our strategic relationship with our democratic partner Taiwan through regular and consistent support,” Rubio said in a press release.

Beijing resorted to its usual rhetoric about the arms sale on Aug. 16. At a daily press conference, Chinese foreign ministry spokesperson Hua Chunying said the United States should stop arms sales to Taiwan or else China would “surely make strong reactions, and the U.S. will have to bear all the consequences.”

In the NTD interview, Fisher said China could retaliate by slapping sanctions against U.S. aerospace giant Boeing, but such a move would hurt Chinese airlines, since they own about 1,500 Boeing planes that would need supplies and parts from the manufacturer.

In June, the Taiwan government also requested the purchase of U.S. battle tanks and missiles made by U.S. defense companies General Dynamics, Raytheon, and Lockheed Martin. A Reuters report cited unnamed sources who said the cost of the 108 tanks would be about $2 billion, while the total price of the missiles would add up to about $650 million.