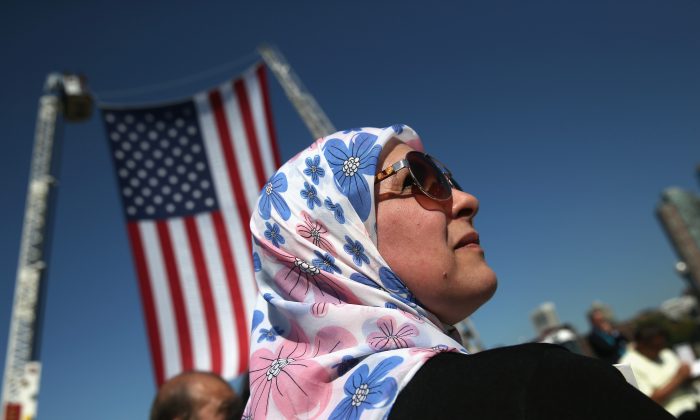 An Algerian immigrant becomes an American citizen during a naturalization ceremony at Liberty State Park in Jersey City, New Jersey, on on September 17, 2015. (John Moore/Getty Images)
US

WASHINGTON—The Obama administration deported fewer immigrants over the past 12 months than at any time since 2006, according to internal figures obtained by The Associated Press as Democratic presidential candidate Hillary Rodham Clinton called Obama’s deportation policies too harsh.

The overall total of 231,000 deportations generally does not include Mexicans who were caught at the border and quickly returned home by the U.S. Border Patrol. The figure does include roughly 136,700 convicted criminals deported in the last 12 months.

In a Miami interview with Spanish-language TV network Telemundo, Clinton promised to be “less harsh and aggressive” than Obama in enforcing immigration laws.

“The deportation laws were interpreted and enforced, you know, very aggressively, during the last six and a half years, which I think his administration did in part to try to get Republicans to support comprehensive immigration reform,” Clinton said in the weekend interview.

In the first two full budget years under the Obama administration, the United States deported more people year over year, until reaching its 2012 peak. Those increases, which started under the administration of President George W. Bush, were small, rising just a few percentage points each year. Nevertheless, the record deportations in 2012 led immigration advocates to criticize Obama as the “deporter-in-chief.”

After multiple bills to overhaul immigration laws failed in Congress during Obama’s first term, he made administrative changes aimed at narrowing the population of immigrants targeted for deportation. The focus since then has been on criminals, and the overall number of deportations has steadily declined.

The Homeland Security Department has not yet publicly disclosed the new internal figures, which include month-by-month breakdowns and cover the period between Oct. 1, 2014, and Sept. 28. The new numbers emerged as illegal immigration continues to be sharply debated among presidential candidates, and has been a special focus of Republican Donald Trump.

And they come as Obama carries out his pledge from before his 2012 re-election to narrowly focus enforcement and slow deportations after more than a decade of rising figures.

The biggest surprise in the figures was the decline in criminal deportations. Homeland Security Secretary Jeh Johnson last year directed immigration authorities anew to focus on finding and deporting immigrants who pose a national security or public safety threat, those who have serious criminal records, and those who recently crossed the Mexican border. The decline suggests the administration has been failing to find criminal immigrants in the U.S. interior, or that fewer immigrants living in the United States illegally had criminal records serious enough to justify deporting them.

“With the resources we have … I’m interested in focusing on criminals and recent illegal arrivals at the border,” Johnson told Congress in April.

Roughly 11 million immigrants are thought to be living in the country illegally.

Obama has overseen the removal of more than 2.4 million immigrants since taking office, but deportations have been declining steadily in the last three years. Removals declined by more than 84,000 between the 2014 and 2015 budget years, the largest year-over-year decline since 2012.

The Homeland Security Department has in the past attributed the steady decline to changing demographics at the Mexican border, specifically the increasing number of immigrants from countries other than Mexico and the spike in unaccompanied children and families caught trying to cross the border illegally in 2014. The majority of the children and tens of thousands of people traveling as families, mostly mothers and children, came from Honduras, El Salvador, and Guatemala.

The Border Patrol historically sends home Mexican immigrants caught crossing the border illegally, but U.S. Immigration and Customs Enforcement must fly home immigrants from other countries. That process is more expensive, complicated, and time-consuming, especially when immigrants fight their deportation or seek asylum in the United States.

More than 257,000 immigrants from countries other than Mexico were apprehended at the border during the 2014 budget year, including more than 68,000 unaccompanied children and tens of thousands of family members. It was the first time that immigrants from other countries outnumbered those from Mexico.