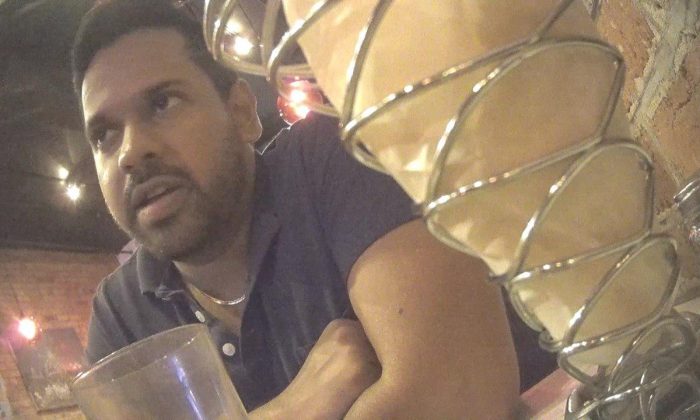 Natarajan Subramanian, an auditor for the Government Accountability Office, was recorded in an undercover video admitting to being a communist and attempting to sabotage the Trump administration. (Courtesy of Project Veritas)
Trump Administration

US Government Auditor, a Communist, Describes His ‘Explicitly Prohibited’ Activities

An auditor for the U.S. Government Accountability Office (GAO) told an undercover reporter that he regularly breaks rules and engages in prohibited activities, by using his work hours to perform tasks for the Democratic Socialists of America (DSA).

“When you’re at work, can you do DSA stuff too? Like when you’re actually in the office?” the reporter for Project Veritas asked.

“‘Can’ is a weird question, right?” the auditor, Natarajan Subramanian, replied. “I would get fired if they knew that I was. And I do. I do it on my phone.”

Project Veritas managed to infiltrate the DC Chapter of the DSA and secretly filmed some of its members. Veritas released a video exposé on Subramanian on Sept. 20.

GAO’s managing director of Public Affairs, Chuck Young, told The Epoch Times via email, “We are aware of the video and investigating the serious issues it raises, and we have also communicated with the GAO Inspector General.”

A part of the legislative branch, GAO is the highest auditing agency in the federal government.

Young said he couldn’t comment on Subramanian’s employment status due to privacy laws, but said Subramanian “has been removed from any ongoing GAO work and cut off from access to GAO equipment.”

“We have a rigorous quality control process with many reviewers that prevents one person from biasing our final reports,” Young said. “But we will also examine his work product as part of our investigation.”

While DSA openly promotes socialism, Subramanian placed himself on the most extreme end of the far-left group.

“We have a bunch of just communists, no prefix, and that’s basically me,” he said. “We have some folks who are Trotskyists or Leninists.”

He said “a fair number” of “DSA people are federal employees.”

“Some of them are, like, full time on political campaigns right now. So like when those end they’re kind of up in the air and some like legislative, some policy people, it’s kind of all over the place,” he said.

“You see people from various agencies, usually Executive Branch,” he said on another occasion.

One DSA operative even has access to sensitive defense information, Subramanian said.

“I have a friend who works as a contractor for DoD [Department of Defense], and he has TS [Top Secret] clearance and he’s very active in DSA,” he said.

The person “works on Syria” on “war planning stuff,” he said.

In a Sept. 18 video, Project Veritas showed State Department analyst Stuart Karaffa describing how he works for DSA on taxpayer time. The State Department said it’s looking into the matter.

GAO Auditing Standards (pdf) stipulate that “government information, resources, and positions are to be used for official purposes” and prohibits their use “inappropriately for the auditors’ personal gain or in a manner contrary to law or detrimental to the legitimate interests of the audited entity or the audit organization.”

“That means no use of federal time for partisan political activities,” Stephen Klein, civil rights attorney with Statecraft law firm, told Project Veritas. Klein is a legal counsel to Veritas.

Subramanian was keenly aware of his transgressions.

“Technically, everything I’m doing with DSA is stuff that I am not supposed to be doing for work,” he said.

“What do you mean?” the reporter asked.

“It’s explicitly prohibited,” he said. “If they found out, I could get in trouble, basically.”

He also acknowledged he broke the rules regularly.

“That’s what my attitude is, like, I break rules every day, at any point I can get fired for stuff that I do with DSA,” he said.

One one occasion, he described spending nearly the whole workday on DSA activities.

“I was like, I’m in the clear, no one knows I spent six hours yesterday doing social media for DSA,” he said.

“I was purposefully a little bit vague about what kind of organization [DSA] is,” he said.

“I’m like, ‘it’s a community organization, we do this, we do that.’ I wasn’t like, ‘It’s a socialist organization and we want to, you know, destroy capitalists.’”

Subramanian provided the forms to Project Veritas, though it’s not clear whether he knew who the recipient was.

In one of the forms, he described DSA as a “Social welfare organization” and his role as “Internal organization, related to DC area residents’ healthcare, housing, labor rights.”

Subramanian put on the form that he works for the DSA “0-10 hours” a week.

“I don’t know, it depends on the week,” he said. “But like, I was doing stuff for DSA at work today.”

He seemed to consider the forms a protection of sorts.

“When they get on my [expletive] about it three years from now and they actually realize what I’ve been doing this whole time, I’ll be like, ‘I’ve been filing these disclosures every year like you wanted,’” he said.

However, the forms may work against him. A law against lying to the federal government states, in part:

“Whoever … makes or uses any false writing or document knowing the same to contain any materially false, fictitious, or fraudulent statement or entry … shall be fined under this title, imprisoned not more than 5 years … or both.”

Subramanian appeared oblivious that his DSA activities may lead to such a liability.

“I would be violating GAO policy, I don’t think it would be a federal statute,” he said. “It would be fireable though. Because all political activity is automatically outlawed.”

Subramanian said he’s selective about who he informs about his DSA activities.

On the other hand, “management does not know. You have to be strategic about things like this,” he said.

He said people he worked with in the past and people in his union know.

Subramanian is listed as the Analyst Unit vice president for membership at the GAO Employees Organization, an affiliate of the International Federation of Professional and Technical Engineers union.

The GAO Employees Organization didn’t respond to a request for comment.

Subramanian appeared to refer to a method of resistance to the administration of President Donald Trump.

“If you’re in Executive Branch agency, you can slowball things to a degree that it’s, like, ineffective,” he said. “And maybe you get in trouble and maybe you get fired or you resign or whatever, but, like, you slowed them down for a certain period of time.”

This approach aligns with details provided by another DSA member, Allison Hrabar, a paralegal at the Justice Department antitrust division.

“There’s a lot of talk at work about, like, how we can resist from the inside, and there’s a lot of, kind of like, push back,” she told an undercover reporter in a Veritas video released Sept. 19. She also gave examples.

The Justice Department stated it’s looking into the matter.

Subramanian also described a strategy of maintaining control over candidates endorsed by DSA.

“We aim to endorse only people who are DSA members. Sometimes we endorse people who aren’t, you know? Like the national organization endorsed [Sen.] Bernie [Sanders, (I-Vt.)].

“Bernie’s not technically a DSA member or whatever. But like, it’s very good to do that because we want to have a certain level of, like, discipline over the candidate,” he said.

“We want to be able to say, ‘look, we made your campaign, we elected you, you have to listen to us.’”

Veritas has released three videos as part of its Deep State Unmasked series starting Sept. 18. Veritas President James O’Keefe described the Deep State as holdovers from the previous administration that attempt to undermine the current one.

He promised more to come, alluding to further revelations of misuse of government resources.

“What happens when Deep State actors inside these agencies are targeting private citizens while on the job?” he asked. “Well, then a real constitutional crisis brews.”

Update: The article was updated with additional comments from Chuck Young, managing director for Public Affairs at the Government Accountability Office.