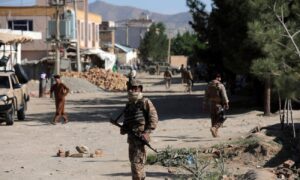 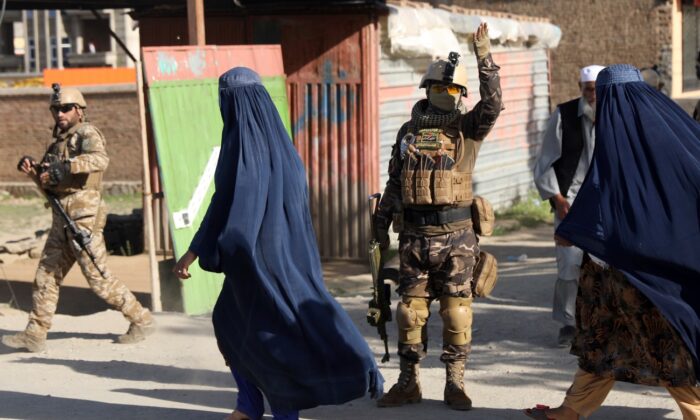 Afghans stand near a mosque after a bomb exploded in the Shakar Dara district of Kabul, Afghanistan, on May 14, 2021. (Rahmat Gul/AP Photo)
Politics

US Government Announces $266 Million in New Aid to Afghanistan

The U.S. government has announced more than $266 million in new humanitarian aid for Afghanistan while urging allies to contribute more generously to address the conflict-stricken country’s immediate humanitarian needs.

“This funding will allow our partners to provide lifesaving protection, shelter, livelihoods opportunities, essential health care, emergency food aid, water, sanitation, and hygiene services to respond to the needs generated by the ongoing COVID-19 pandemic,” the State Department said in a June 4 release.

The department said the funds would help address the needs of the most vulnerable Afghans, including “women and girls facing particular risks, including gender-based violence, as a result of the pandemic and decades of conflict.”

The announcement comes as the United States continues to wind down its military presence in Afghanistan to meet the Sept. 11 deadline for a full withdrawal, which has sparked fears of renewed conflict and a Taliban return to power.

Michael Johns, a former White House speechwriter and Heritage Foundation foreign policy analyst, called for the United States to maintain an active role as a peace broker in the region.

“The greatest threat to peace and stability in Afghanistan is the Taliban seeing the departure of U.S. troops as an invitation to utilize military force in ways that undermine power-sharing and contradict the commitments it has made,” Johns told The Epoch Times in an emailed statement. “That threat would be amplified considerably should any regional power assist the Taliban in such a pursuit.

“The U.S. must reinforce that any effort to undermine the peace and stability of Afghanistan by Russia, China, Iran, or any other force would be viewed as an act of immense hostility against the U.S. and would be met with punitive measures.”

In its announcement, the State Department signaled its continued engagement in a nonmilitary capacity.

“As the United States withdraws military forces from Afghanistan, our enduring commitment is clear,” the State Department said. “We remain engaged through our full diplomatic, economic, and assistance toolkit to support the peaceful, stable future the Afghan people want and deserve.”

At the same time, the State Department renewed its call for Afghan leaders and the Taliban to negotiate a political settlement and permanent ceasefire that would bring an end to over 40 years of conflict that has led to the internal displacement of over 4.8 million Afghans.

“This year alone, more than 115,000 persons have been displaced by conflict inside Afghanistan, and nearly 500,000 have returned to Afghanistan in need of assistance,” the State Department said.

Hamid Bahrami, an author and independent Middle East analyst based in Glasgow, Scotland, called for pressure on countries that provide money and weapons to the Taliban.

“Because Afghanistan’s conflicts are rooted in the region, the solution also requires pressure on countries like Iran, Pakistan, and Qatar to end their financial and weapons support to the Taliban and pursue their interests through multilateral diplomacy,” Bahrami told The Epoch Times in an emailed statement.

“The multifaceted use of the Taliban and the Afghanistan government as tools of pressure on each other will only increase regional warfare and the export of terrorism.”