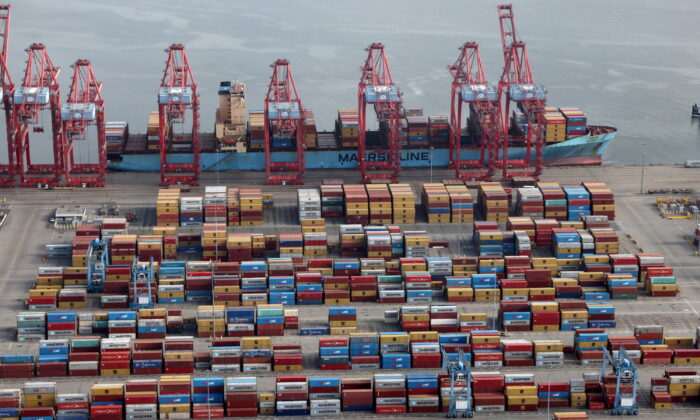 Shipping containers are unloaded from a ship at a container terminal at the Port of Long Beach–Port of Los Angeles complex on April 7, 2021. (Lucy Nicholson/Reuters)
Economy

The better-than-expected reports from the Commerce Department on Wednesday left economists scrambling to upgrade their gross domestic product estimates for the last quarter, which had ranged from negative to barely growing. The data were published ahead of the release on Thursday of the advance second-quarter GDP estimate.

A raft of soft housing data as well as weak business and consumer sentiment surveys had raised expectations for a second straight quarterly negative GDP reading, exacerbating worries of a recession.

JPMorgan now expects the economy grew at a 1.4 percent annualized rate instead of the previously forecast 0.7 percent pace.

“This morning’s data leaves us more convinced that second-quarter GDP will not decline in tomorrow’s release,” said Veronica Clark, an economist at Citigroup in New York.

The goods trade deficit shrank 5.6 percent to $98.2 billion, the smallest since last November. Goods exports increased $4.4 billion to $181.5 billion. There were strong gains in exports of food and industrial goods. But fewer capital and consumer goods as well as motor vehicles and parts were exported.

Imports of goods fell $1.5 billion to $279.7 billion. They were pulled down by imports of motor vehicles and food. Imports of consumer and capital goods, however, increased strongly.

Trade has subtracted from GDP for seven straight quarters and the anticipated contribution to GDP from the smaller gap is likely to offset an expected drag from inventories.

While businesses continue to rebuild inventory, the pace has slowed from what was seen in the fourth quarter of 2021 and the first three months of this year. With consumer spending slowing, business are also cautious about accumulating too much stock.

The Commerce Department also reported on Wednesday that wholesale inventories increased 1.9 percent in June, while stocks at retailers rose 2.0 percent. Retail inventories were boosted by a 3.1 percent jump in motor vehicle stocks.

“We now expect narrowing in the trade deficit in the second quarter to provide even more support for headline GDP growth than we had previously anticipated, and we also expect less of a drag from inventories than our earlier forecast,” said Daniel Silver, an economist at JPMorgan in New York.

According to a Reuters survey of economists, GDP likely increased at a 0.5 percent annualized rate in the second quarter. The survey was conducted before Wednesday’s data. The economy contracted at a 1.6 percent pace in the first quarter.

Investors have been nervous about another negative quarterly GDP reading, which would mean a technical recession. The White House is vigorously pushing back against recession chatter as it seeks to calm voters ahead of the Nov. 8 midterm elections that will decide whether President Joe Biden’s Democratic Party retains control of the U.S. Congress.

But GDP is only one of the many indicators tracked by the National Bureau of Economic Research, which is the official arbiter of recessions in the United States. As such, a second straight quarter of contraction in GDP would not mean the economy was in recession.

Stocks on Wall Street were higher. The dollar dipped against a basket of currencies. U.S. Treasury prices rose.

Economic activity is cooling as the Federal Reserve aggressively tightens monetary policy to tame inflation. The U.S. central bank on Wednesday raised its policy rate by another three-quarters of a percentage point, bringing the total interest rate hikes since March to 225 basis points.

There were big increases in orders for computers and electronic products as well as electrical equipment, appliances, and components. But orders for machinery dipped.

“Some of the increase is attributed to higher prices but the absence of a sustained decline in orders suggests that businesses are still investing despite tighter financial market conditions, drop in sentiment and worries about a recession,” said Ryan Sweet, a senior economist at Moody’s Analytics in West Chester, Pennsylvania.

Orders for durable goods, items ranging from toasters to aircraft that are meant to last three years or more, surged 1.9 percent in June after rising 0.8 percent in May. They were boosted by a 5.1 percent jump in orders for transportation equipment. Motor vehicle orders increased 1.5. Orders for defense aircraft soared 80.6 percent.