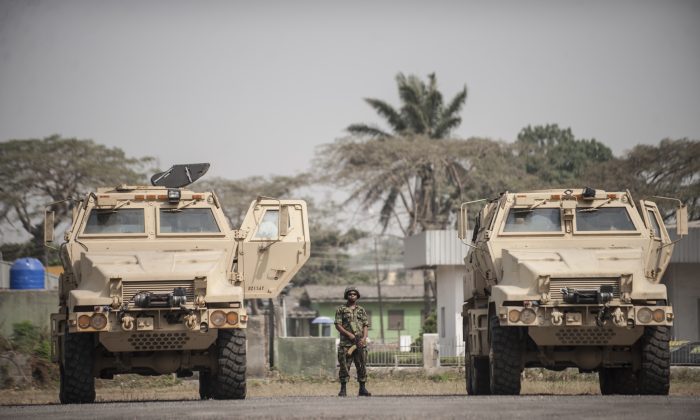 A Nigerian soldier stands between the 24 armoured vehicles donated by the United States to the Nigerian military at the Nigerian Army 9th Brigade Parade Ground in Lagos on Jan. 7, 2016. (Stefan Heunis/AFP/Getty Images)
Africa

Buba Ummate, a survivor, said: “They came in military uniforms and … just started firing there. At least 18 people were killed in that Monday attack, he said.

Ummate said the following day, three female suicide bombers sneaked into Izghe and detonated bombs hidden under their garments, killing seven other people and destroying three houses. A male suicide bomber also blew himself up, killing himself and four other people, said Yusuf DanIzge, who learned of the attack from relatives who live in the community.

A statement from the U.S. Consulate in Lagos said the MRAP vehicles, valued at $11 million, were being handed over on Thursday to assist the West African country with both technical and military hardware to enable it to combat the rising challenges of regional extremism.

Temitayo Famutimi of the U.S. Department of State said: “The equipment donation represents part of the continuing U.S. commitment to Nigeria and its neighbors to counter Boko Haram’s senseless acts of terror and promote regional security.”

The United States also provides advisers, intelligence, training and logistical support to Nigerian military fighting Boko Haram as well as humanitarian aid and victim support services to some of the 2.5 million people driven from their homes by the insurgency.