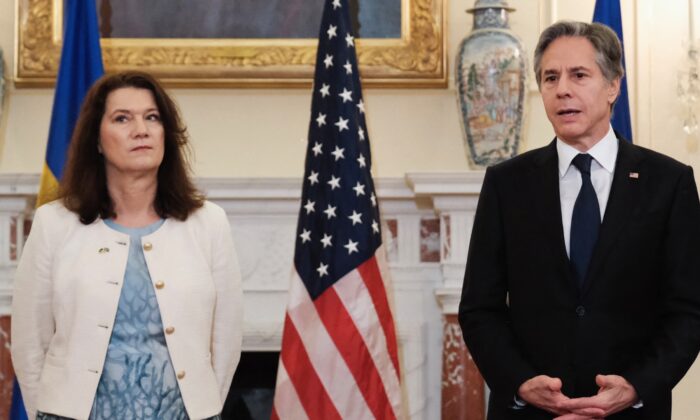 US Assures Sweden of Support Should It Submit NATO Application

The U.S. government has reaffirmed to Sweden its commitment to NATO’s “open-door policy” and said that it will support the Nordic country during the period of a potential NATO application.

Swedish Foreign Minister Ann Linde met with U.S. Secretary of State Antony Blinken in Washington on May 4 and discussed NATO’s commitment to welcoming new members and assuring European security, among other issues.

“Blinken underscored the importance of the Transatlantic relationship to European security and reaffirmed our commitment to NATO’s Open Door policy,” State Department spokesman Ned Price said in a statement.

Price said Blinken also thanked Sweden for its “extensive humanitarian and security assistance” to Ukraine and discussed potential ways to provide more support to the country in conflict. They further discussed bilateral cooperation on international issues that include strengthening food security, advancing democracy, and support for the ongoing truce in Yemen.

The statement made no mention of what assurances Linde had received from Blinken. The move comes on the same day that British Defense Secretary Ben Wallace said the UK would always help Finland if it were attacked by Russia, whether or not the country was a member of NATO.

“Naturally, I’m not going to go into any details, but I feel very sure that now we have an American assurance,” Linde told Swedish TV from Washington after meeting with Blinken, Reuters reported. “However, not concrete security guarantees—those you can only get if you are a full member of NATO.”

Finland and Sweden are partners of the NATO military alliance, but not full members. Following Russia’s attack on Ukraine, both countries reviewed long-held beliefs that military neutrality is the best means of ensuring national security. They’re expected to make a decision about whether to apply to join NATO this month.

Both countries are concerned that they would be vulnerable during an application process, which could take up to a year to be approved by all NATO members.

Linde said the guarantees would mean that the United States wouldn’t allow Russia to use any direct kind of negative activities against Sweden. Such actions would trigger a response from their U.S. counterpart.

Once a country is a full member of NATO, it benefits from the alliance’s collective defense clause, which obliges all 30 member countries to come to the aid of any ally that comes under attack.

Russia, for its part, has previously warned Sweden and Finland against joining NATO, with officials saying it wouldn’t contribute to stability in Europe. Moscow said it would respond to such a move with retaliatory measures that would cause “military and political consequences” for Helsinki and Stockholm.

Sweden’s defense minister said last month that an application might trigger a number of responses from Russia, including cyberattacks and hybrid measures—such as propaganda campaigns—to undermine Sweden’s security.

In addition, Moscow has also warned that it could use nuclear weapons in the European exclave of Kaliningrad if Sweden and Finland become NATO members.