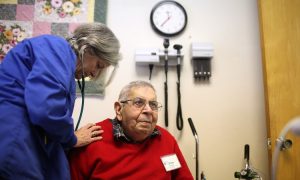 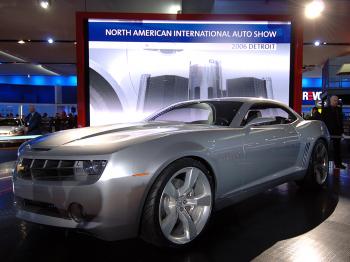 NEW YORK—Last week Congress tossed a lifeline to the long-suffering U.S. auto industry, in the form of a $25 billion low-interest loan to develop and produce fuel-efficient vehicles.

“American auto companies are facing huge challenges,” said Sen. Carl Levin (D-Mich.). “[The loans] will help our companies stay competitive in the global marketplace and ensure that these technologies enter the market place and continue to be manufactured in America.”

The loan is part of a broad aid package from Washington to help U.S. automakers—General Motors, Ford Motors, and Chrysler LLC—modernize their manufacturing plants, update models, and meet the new fuel economy standards.

With the capital markets in flux, auto executives say that the loan will help companies retool and invest in the future.

The public received a sneak peek of the future when GM unveiled its Chevrolet Volt, an electric car capable of driving 40 miles on a single charge. The Volt is expected to go on sale in 2010.

The loan will carry interest rates around 5 percent, much less than the borrowing rates of automakers given operational and credit concerns. Automakers expect to pay back the loan in full without taxpayer support.

"It's a huge victory for our members, for U.S. manufacturing companies and for American consumers," said United Auto Workers President Ron Gettelfinger. "This is a smart investment that will speed the introduction of more fuel-efficient vehicles and also create tens of thousands of good-paying U.S. manufacturing jobs."

The loan requires automakers to invest in cars that achieve 25 percent better fuel mileage than similar vehicles in the same class. Industry analysts believe the bulk of the money will be used to address immediate needs—such as revamping existing plants and improving fuel economy on current or future models—rather than for research and development.

Chevy’s Volt is exactly what GM envisioned to lead the company back to profitability.

"The Volt is symbolic of GM's strong commitment to the future … just the kind of technology innovation that our industry needs to respond to today and tomorrow's energy and environmental challenges,” GM Chairman Rick Wagoner said in a statement.

Ford currently sells hybrid vehicles, and the company also plans to introduce several small cars to the European and North American markets. Chrysler is developing its own electric vehicle for mass production within three years.

A new law passed last year requires all automakers to achieve fuel efficiency of 35 miles per gallon by 2020.

Critics to the bill argue that instead of spending millions in lobbying activities, the U.S. auto industry should face market realities and stop portraying itself as a victim.

“Despite a slowing U.S. economy, Toyota and Honda saw only single-digit losses in their August sales. Nissan's sales were up. Those companies know how to run successful auto manufacturing plants in the U.S. and aren't asking for help,” said editors of Christian Science Monitor in a column titled “How Not to Rescue the Big Three.”

Others cite ineffective leadership and missed opportunities for Detroit’s failures. Many foreign automakers also built factories in the United States, and face similar market forces and changes in consumer demand.

“Detroit is no more deserving than many other U.S. industries—textiles, furniture, toys—that have failed to compete well against foreign companies,” the editors argued.