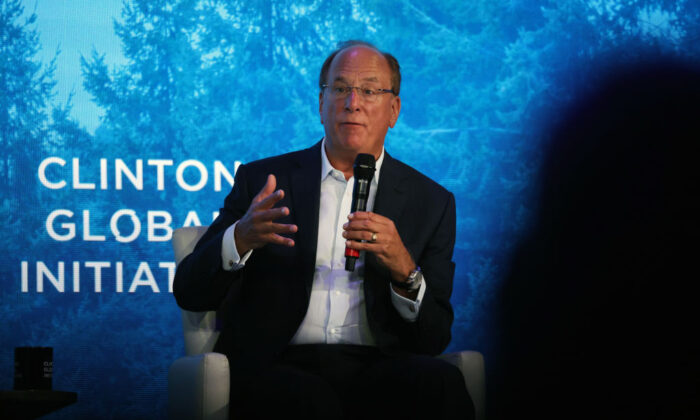 BlackRock CEO Larry Fink speaks at a forum during the opening of the Clinton Global Initiative (CGI), a meeting of international leaders in New York City on Sept. 19, 2022. (Spencer Platt/Getty Images)
Business & Markets

Founded in 2008, solarZero says it has built the region’s largest “virtual power plant” and installed systems on over 9,000 homes.

The company’s business model is unique in that it installs panels and batteries at no cost to the homeowner, with solarZero maintaining ownership over the hardware. Together these systems work together to form a virtual power plant that can shift electricity where it is needed.

This model has helped accelerate the rollout of solarZero, with the company claiming it is installing a new system every 35 minutes. There are also plans to invest NZ$1 billion into solar panels and batteries across New Zealand over the next 10 years.

Currently, the entire network generates 89 GWh per year and holds around 48 MWh of storage.

The battery technology was co-developed with Panasonic, who said the network freed customers from “power outages and rising energy costs.”

“This is a world-first battery platform design, and we are looking forward to working alongside solarZero and the BlackRock Climate Infrastructure team to take this breakthrough technology global,” said Stewart Fowler, managing director of Panasonic New Zealand, in a statement on Sept. 14.

Meanwhile, Andrew Booth, founder and CEO of solarZero, said that by 2030, around 50 percent of the world’s energy would be generated in the Asia-Pacific—China and India being the two largest markets.

“The power couple of ‘solar plus storage’ is one of the few true paths to energy security, stable power prices, prosperity, and a liveable planet,” he said.

Charlie Reid, Asia-Pacific co-head of BlackRock’s Climate Infrastructure team, said this was the first investment into New Zealand by the U.S. asset manager.

“SolarZero is a global pioneer, and we look forward to supporting its expansion into other Asia-Pacific markets and, at the same time, to accelerating New Zealand’s net-zero journey,” he said.

The move into New Zealand is the latest in a flurry of investment decisions from BlackRock and comes after it plunged A$1 billion (US$701 million) into Australia’s Akaysha Energy and its nine battery projects.

BlackRock’s hard push into clean energy investments comes after the company recorded a $1.7 trillion loss in the first half of 2022, as well as pressure from 19 U.S. state attorney-generals to explain how its move to embrace net-zero and invest in clean energy projects fulfils its fiduciary duty to shareholders.

One key issue is whether BlackRock is breaching its fiduciary duty—to generate returns and profits for shareholders—when it engages in “activism” including climate change initiatives, which may not bear the best return.

“If these funds are pressuring companies to do things that will see them underperform, then you have to wonder what incentive operates inside that fund to push that angle?” he previously told The Epoch Times.

“Are they being rewarded for poorly performing investments? Are they charging more for ESG investments to cover or compensate (the fund manager) for the seemingly illogical pressure they are bringing to bear on their portfolios?”