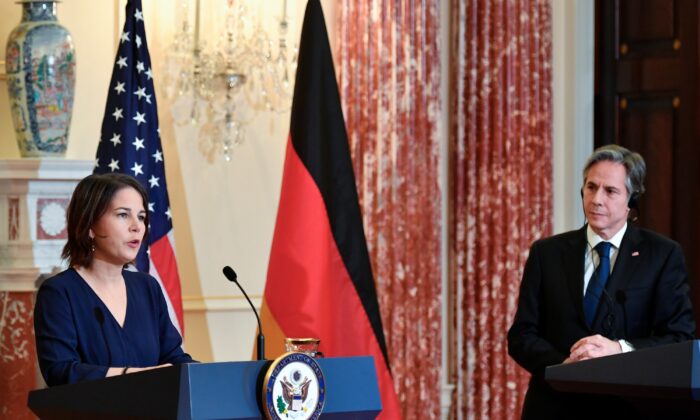 German Foreign Minister Annalena Baerbock speaks during a news conference with Secretary of State Antony Blinken at the State Department in Wash., on Jan. 5, 2022. (Mandel Ngan/Pool via AP)
International

WASHINGTON—The United States and Germany said Wednesday that Russia’s military buildup near Ukraine’s border poses an “immediate and urgent challenge” to European security and that any intervention will draw severe consequences.

But the country’s top diplomats left open what those consequences would be and how differences on arming Ukraine and a controversial Russian gas pipeline will be resolved.

Secretary of State Antony Blinken and German Foreign Minister Annalena Baerbock sought to present a unified front on Russia after a meeting in Washington.

“Both Germany and the United States see Russia’s actions toward Ukraine as an immediate and urgent challenge to peace and stability in Europe,” Blinken said.

“We condemn Russia’s military buildup on Ukraine’s borders, as well as Russia’s increasingly harsh rhetoric as it continues to push the false narrative that Ukraine seeks to provoke (Russia),” he said. “That’s a little bit like the fox saying it had no choice but to attack the henhouse because somehow the hens presented a threat.”

Baerbock agreed. “We jointly reiterated that Russian actions and activities come with a clear price tag, and a renewed violation of Ukrainian sovereignty by Russia would have severe consequences,” she said.

It also preceded a flurry of meetings involving NATO foreign ministers, senior U.S. and Russian officials, the NATO-Russia Council and the Organization for Security and Cooperation in Europe set for next week.

“The real question is whether Russia is serious about diplomacy, serious about de-escalation,” Blinken said. “Let’s see where this goes over the next weeks.”

Western officials have hinted at any number of economically crippling sanctions that could be imposed should Russia act. Those include near total cutoff from the international financial system and steps toward greater NATO integration with non-allied European nations.

But, there have been very few specifics and Blinken again declined to discuss them. “I’m not going to telegraph them publicly, but I can tell you with great confidence that a tremendous amount of work has been done already. There is very strong coordination and collaboration and very strong agreement on measures that would be taken in the event of renewed Russian aggression against Ukraine.”

As the Biden administration moves to build international consensus around a set of possible punitive measures, Germany is clearly the linchpin. Securing the support of Europe’s biggest economy will be key to both messaging and implementation of whatever is decided.

Baerbock is the top diplomat in the first German government in 16 years not headed by Angela Merkel. She has struck a tougher tone on Russia than her predecessor. But Germany has adopted a less confrontational stance toward Russia compared with many other European nations.

Germany’s business ties with Russia could provide leverage, but they could also prove a hindrance for forging a united front toward Moscow. Despite strong criticism from the United States, the center-left government of new Chancellor Olaf Scholz hasn’t shown itself willing to block the start of natural gas deliveries through a newly built pipeline linking Russia and Germany—a move that would hurt both countries.

Under Merkel, Germany persuaded the Biden administration last year not to impose sanctions on the company building the Nord Stream 2 pipeline, which many believe will leave Europe beholden to Russia for energy and Ukraine more vulnerable.

Blinken noted that the pipeline, while completed, has yet to go into operation, and said gas flows through it would be unlikely if Russia invades Ukraine.

“If Russia renews its aggression toward Ukraine, it would certainly be difficult to see gas flowing through it in the future,” he said. This actually gives the EU leverage over Russia, he said, rather than the other way around.

Baerbock sidestepped the question of whether the pipeline would be operationalized in the event of a Russian intervention. However, she said the new German government would abide by an agreement signed last summer with Washington that says Russia will not be allowed to use energy as a political weapon against Europe.

Blinken did not directly address her response but said the United States would press ahead with joint measures on the pipeline if necessary.

“We will continue to work in a way that I hope can be effective in dealing with energy issues and challenges, including those posed in our judgment by Nord Stream 2, and also in a way that preserves what is so vital, and that is strong trans-Atlantic solidarity. That is the most effective response and most effective tool that we have in countering Russian aggression,” he said.

Nord Stream 2 is a topic of major concern in Washington, and Congress is expected to take up two bills related to it and other Russian sanctions next week, just as the meetings in Europe are happening. A GOP bill would automatically impose Nord Stream sanctions, while a Democratic version would impose a wider range of penalties on Russia should it invade Ukraine.

Both Democratic and Republican lawmakers in Washington have blamed Nord Stream 2 for increasing Russia’s leverage over Germany and limiting what Berlin would be willing to do in response to a new invasion. Germany, like much of the European Union, is heavily reliant on Russian natural gas.

Blinken said the United States has delivered weapons to Ukraine and would continue to do so in the event of a further Russian military assault on the country.

Echoing concerns by some in Germany that this could stoke military tensions with Russia, Baerbock said “we have a different position on arms supply to Ukraine,” but noted that Berlin has provided a military hospital to the Ukrainian army and support in treating wounded soldiers.

By Matthew Lee and Frank Jordans