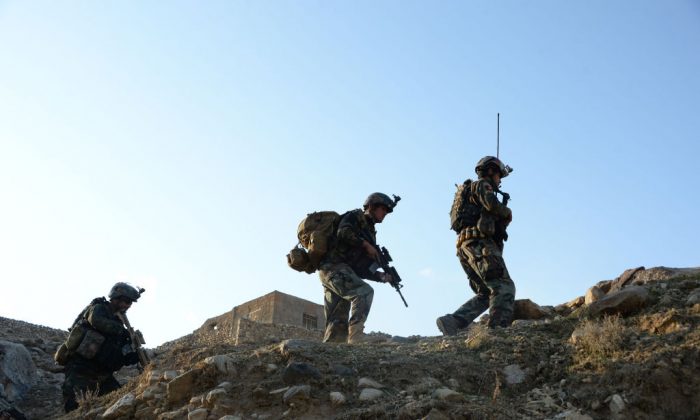 US General: Marines Killed Dozens of Taliban Leaders in Afghanistan

Dozens of Taliban leaders in Afghanistan were killed last week after U.S. Marines used rocket artillery to strike them down, according to a top American general.

About 50 Taliban commanders were tracked down to a meeting in Musa Qal’ah before they were struck, Army General John W. Nicholson said at a Pentagon press conference Wednesday, May 30, from his office in Kabul.

“Through some great intelligence work by our Marines, led by Brigadier General Ben Watson, they tracked 50 of them to a meeting in Musa Qal’ah and struck them with HIMARS rockets, killing dozens of the enemy leaders,” Nicholson said.

The rocket strikes were fired from the High Mobility Artillery Rocket System, commonly known by its acronym, HIMARS.

The deputy shadow governor of Helmand—a senior Taliban leader—was among those killed, as were a number of other leaders below his rank.

Nicholson said the group of commanders was planning to discuss operations in Farah and noted that many of them were involved in drug trafficking in Helmand, their main source of revenue.

“Helmand’s been the financial engine of the insurgency. The Taliban draws 60 percent of their revenue from narcotics, criminal activity,” he said.

While the U.S. general said they had achieved a “disruptive effect” at the local level in Helmand, he stressed that it did not have much broader strategic significance in the fight in Afghanistan.

The strike hit a village in an isolated area and killed at least two senior figures, also one believed to be a trainer of suicide bombers.

The U.S. has been fighting the insurgent group for more than 16 years.

Earlier this week the Israeli army said they had destroyed a tunnel created by the Hamas terrorist group in the Gaza strip area that went through an Egyptian and Israeli territory. Israel Defense Forces said the tunnel was designed for “terror purposes and weapons smuggling,” adding that was the second such tunnel detected near the crossing and the 10th tunnel found since October last year.