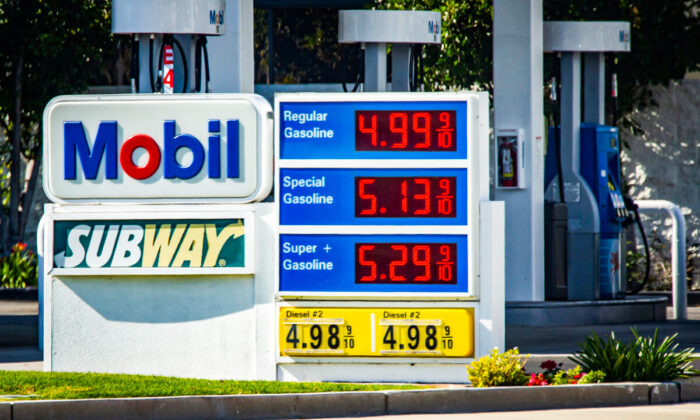 Gas prices surged to the highest level since 2008 on Sunday, hitting over $4 per gallon on average across the United States, according to automotive service organization AAA.

California led the country with gas prices averaging more than $5.28 per gallon of regular unleaded, according to data from AAA. Nevada, Hawaii, Washington state, and Oregon all averaged more than $4.60 per gallon.

Analysts noted that the $4 average, not adjusted for inflation, is the highest since July 2008.

Andy Lipow, president of Lipow Oil Associates, said that gas prices will likely rise to $4.50 per gallon in the near future.

“Oil buyers are reducing their purchases of refined products from Russia causing Russian refineries to shut down,” he told the Daily Mail. “Dock workers are refusing to unload vessels carrying oil and gas. Insurance rates are skyrocketing causing vessel owners to cancel ship bookings loading in Russia and this is also impacting on the ability of Kazakhstan to sell their oil.”

While Democrats and the Biden administration have started to blame the Russia-Ukraine conflict for the elevated gas prices, those prices had already been rising due to inflation. Months before the conflict, in October, prices in California averaged $4.45 per gallon, Hawaii averaged $4.13, and Nevada $3.90, according to reports.

Critics have said that the Biden administration is trying to pivot away from blaming the high gas prices on inflation, instead of focusing on the Russia-Ukraine conflict.

In mid-January, about a month before Russia’s invasion, the Department of Labor said that gas prices skyrocketed about 50 percent year-over-year.

Data released by the Bureau of Labor Statistics in mid-February showed that inflation is still picking up its pace, accelerating to an annual 7.5 percent in January, the highest rate in 40 years.

“Not only have home prices jumped 20 percent in the past year, but now many rents are too, rising 0.5 percent in the past month alone. Nothing squeezes household budgets more than the outsized increases we’re currently seeing on costs for shelter and housing,” he added.

The White House, which has hit Russia with heavy sanctions in recent days, may ban the importation of Russian oil, according to Secretary of State Antony Blinken on Sunday.