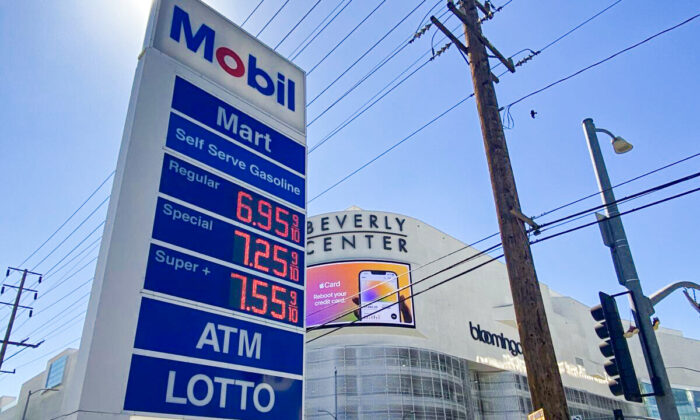 American motorists are paying a record price at the gas pump this week, as the sanctions on Russia for its invasion of Ukraine disrupt global energy shipments and jack up the cost of energy.

The national average price of a gallon of gas was $4.25 as of the morning of March 9, according to the American Automobile Association (AAA).

The national average was hovering at roughly $3.46 just one month ago and was just $2.77 per gallon one year ago.

Americans were facing high inflation well before the Russian invasion of Ukraine, due to supply chain issues and an economy shaken by the pandemic.

Rising energy costs are a key factor in driving up inflation and the crisis in Ukraine is not expected to improve things.

Economists are expecting the upcoming Consumer Price Index to show inflation rise to 7.8 percent in February, the highest rate in decades.

Sanctions on Russia have affected the country’s fertilizer and metals exports and the export of crude oil, which is one of the biggest factors in determining gas prices.

Russian crude oil only accounts for 3 percent of U.S. imports, but it produces strategically important heavy, sour crude, which U.S. refineries use for a blend of heavy and the more available light, sweet crude, to produce gasoline.

Other factors for rising gas prices include higher consumption due to relaxing pandemic restrictions, which is exceeding available supplies.

“Consumers can expect the current trend at the pump to continue as long as crude prices climb,” said AAA.

Analysts fear that prices could get even worse in the days ahead, especially if geopolitical tensions between Russia and Western nations continue to escalate.

U.S. gas prices are skyrocketing at a disturbing rate and they are not expected to slow down soon, even if the conflict in Ukraine is settled peacefully.

Some analysts say that gas prices could soon reach $5 per gallon in the United States.

“It’s a dire situation and won’t improve anytime soon. The high prices are likely to stick around for not days or weeks, like they did in 2008, but months,” said Gas Buddy analyst Patrick De Haan, who said that “the yearly national average to rise to its highest ever recorded.”

“Forget the $4 per gallon mark, the nation will soon set new all-time record highs, and we could push closer to a national average of $4.50/gal. California could be heading for $5.50 per gallon, with more stations charging $6 and beyond,” said De Haan.

Drivers in high-tax states like California and New York are facing the steepest bills.

Meanwhile, diesel prices have seen a more dramatic rise in cost than regular gas, with the national average price at $4.75 on March 8, just seven days after it was at $4.01.

The following day, on March 9, the national average price of diesel hit $4.88 a gallon, breaking the record for the most expensive diesel prices on record, not adjusting for inflation.

President Joe Biden said that the Russian invasion of Ukraine would have “costs around the world ”at his State of the Union address earlier this month.

On March 8, the Biden administration announced that it will impose a ban on Russian oil and gas imports, which is like to cause oil to surge much higher, further impacting an energy market that has struggled to meet demand during the CCP (Chinese Communist Party) virus pandemic.

The Kremlin official threatened that oil will hit $300 per barrel if the United States and its European allies proceed with the ban.

Biden pledged at a White House press conference to “use every tool at our disposal to protect American businesses and consumers” and will authorize the release of 30 million barrels of oil from the Strategic Petroleum Reserve.

When later asked what he could do about rising fuel prices which are hurting American consumers, Biden said “we can’t do much right now,” adding that “Russia is responsible.”