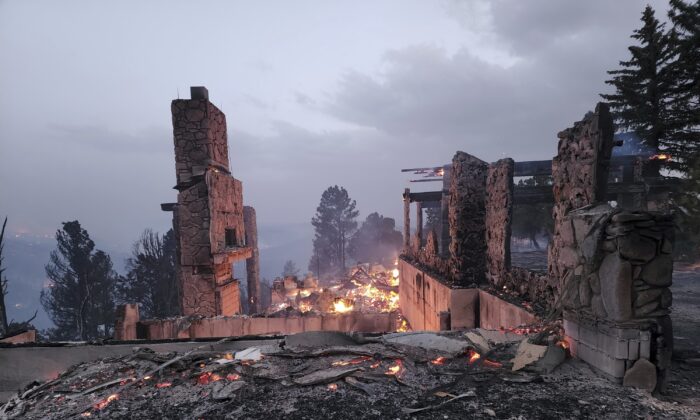 The remains of a home left after a wildfire spread through the Village of Ruidoso, N.M., on April 13, 2022. (Alexander Meditz via AP)
Regional News

Federal agencies and the State of New Mexico said Friday that one of the U.S. Forest Service’s forest management measures, also known as “prescribed burn,” started the largest wildfire in New Mexico.

“Forest Service fire investigators have determined that the Calf Canyon Fire on the Pecos/Las Vegas Ranger District of the Santa Fe National Forest (SFNF) was caused by a pile burn holdover from January that remained dormant under the surface through three winter snow events before reemerging in April,” agencies said in an update on a website jointly managed by the Bureau of Indian Affairs, Bureau of Land Management, Fish and Wildlife Service, National Park Service, State of New Mexico, and U.S. Forest Service.

The situation is also called a holdover fire, or a sleeper fire, which means a fire that remains dormant for a considerable time.

The originally prescribed burn, which caused the Calf Canyon Fire, was concluded on Jan. 29 but reignited and escaped containment lines on April 19. It merged with the Hermits Peak Fire, another wildfire caused by an escaped prescribed burn, three days later after a wind event caused significant fire spread.

New Mexico Gov. Lujan Grisham called on the Forest Service to take full responsibility for the largest wildfire in her state.

“This is a first step toward the federal government taking full responsibility for the largest wildfire in state history, which has destroyed hundreds of homes, displaced tens of thousands of New Mexicans, and cost the state and local governments millions of dollars. I appreciate the U.S. Forest Service [for] assuming responsibility for the federal actions that caused this terrible crisis,” she said in a statement.

The wildfire has burned more than 312,000 acres and caused over $132 million of fire suppression costs, the governor said.

She added that the U.S. Forest Service will pay all those costs.

Before the agency confirmed the cause of the Calf Canyon Fire, Forest Service Chief Randy Moore announced on May 20 a pause in the use of prescribed fire on National Forest System lands and initiated a 90-day review of the operation.

“The review I am announcing today will task representatives from across the wildland fire and research community with conducting the national review and evaluating the prescribed fire program, from the best available science to on-the-ground implementation. Lessons learned and any resulting program improvements will be in place prior to resuming prescribed burning,” Moore said in a statement.

The head of the agency said then that the pause of prescribed burn will not affect forest management much because most planned burn operations happen between September and May.