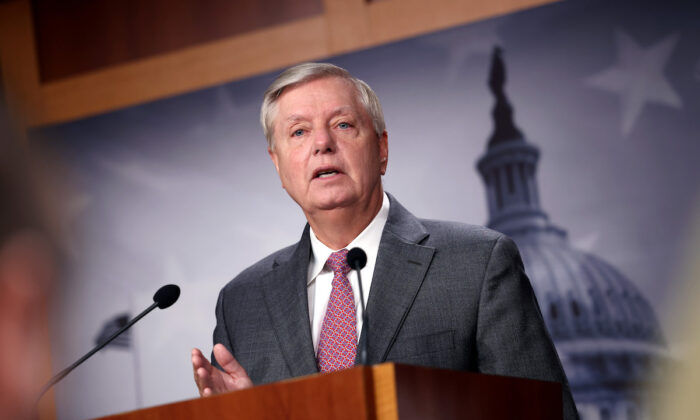 Sen. Lindsey Graham (R-S.C.) during a news conference at the U.S. Capitol in Washington, on July 30, 2021. (Kevin Dietsch/Getty Images)
Afghanistan

US Could Be Forced to Reinvade Afghanistan to Combat ‘Radical Islamic Behavior’: Graham

The United States will eventually have to return to Afghanistan due to the risk of al-Qaeda’s return, Sen. Lindsey Graham (R-S.C.) said on Sunday, adding that the war-torn country will likely become “a cauldron for radical Islamic behavior.”

The Republican senator made the remarks during an interview with BBC’s HARDtalk host Stephen Sackur, explaining that since the Taliban has returned to power, terrorist threats coming from the Central Asian nation could increase.

“Here’s where we’re at … The Taliban are not reformed, they’re not new,” said Graham. “They have a view of the world out of sync with modern times. They’re going to impose a lifestyle on the Afghan people that I think is going to make us all sick to our stomach.”

“But most importantly, they’re going to give safe haven to al-Qaeda, who has ambitions to drive us out of the Mideast writ large and attack us because of our way of life,” he continued. “We will be going back into Afghanistan, as we went back into Iraq and Syria.”

Sackur, questioning Graham, asked him to clarify why he thinks the United States will put American troops once again in Afghanistan after the hasty withdrawal of all forces about a week ago.

A rushed evacuation effort led by the Biden administration ended on Aug. 30, with the final U.S. flight of evacuees leaving Kabul’s airport in the Afghan capital hours before President Joe Biden’s Aug. 31 deadline. The withdrawal concluded 20 years of American involvement in the country after the Sept. 11, 2001, attacks.

“We’ll have to because the [terror] threat will be so large. It will be a cauldron for radical Islamic behavior,” Graham said while responding to Sackur’s question.

“Why did we go back to Syria and Iraq? Why do we have 5,000 troops in Iraq today? Because of the caliphate rising, projecting force outside of Iraq,” he added. “Killing Americans, killing the French, attacking the British.”

Graham is among a number of other people who have said they believe that the United States will have to return to Afghanistan again at some point to combat terrorism.

Former CIA Director Leon Panetta, the secretary of defense under President Barack Obama who oversaw the U.S.-led mission that killed al-Qaeda terrorist leader Osama bin Laden, said on Aug. 26 that American troops could return to Afghanistan when “al-Qaeda resurrects itself.”

“They gave safe haven to al-Qaeda before, they’ll probably do it again,” he claimed, referring to the Taliban, which previously helped al-Qaeda by providing sanctuary, allowing terrorists to plan and carry out deadly attacks around the world.

Although the Taliban recently reassured world powers that it will present itself as “more moderate” than when it imposed Sharia in the late 1990s, Panetta said they are still “terrorists and certainly supporters of terrorists.”