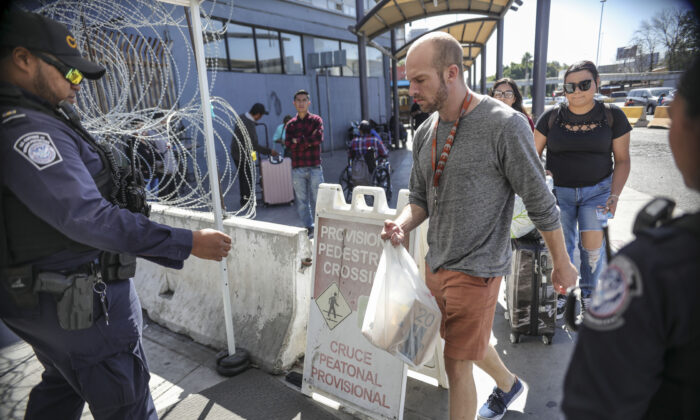 An Immigration and Customs Enforcement (ICE) agent checks pedestrians' documentation at the San Ysidro Port of Entry on October 2, 2019 in San Ysidro, California. Fentanyl has been central to the American opioid crisis which began in the late 1990s. China was the first country to manufacture illegal fentanyl for the US market, but the problem surged when trafficking through Mexico began around 2005. (SANDY HUFFAKER/AFP via Getty Images)
US-China Relations

US Flooded with Fentanyl-Laced Fake Pills from China: Part 2

Even registered fentanyl manufacturers in China have engaged in commercial bribery, illegal sales of fentanyl through the internet, and packaging designed to dodge customs inspection, according to publicly available information.

On Dec. 1, 2018, Chinese Foreign Minister Wang Yi indicated that all drugs in the fentanyl category would be regulated. Soon after, Jiangsu Enhua Pharmaceutical and Wuhan Human Well Pharmaceutical announced on Dec. 3 that they had never exported any fentanyl products to the United States.

However, Chinese state media recently reported that Yichang Human Well Pharmaceutical Co., Ltd., a subsidiary of Wuhan Human Well, was rated as a “seriously untrustworthy” company by Henan Province medical authorities for offering bribes to an anesthesiologist to get him to sell four drugs to a local hospital, including Sufentanil Citrate, a fentanyl-type analgesic that is administered by epidural injection or intravenously.

Anesthesiologists have also been involved in illegal sales of fentanyl drugs. Two anesthesiologists, from different hospitals in Henan Province, were found to be selling drugs, including fentanyl, online. One of them made approximately $32,000 in less than two years, according to an indictment issued by the local prosecutors’ office.

China’s fentanyl trade is highly secretive. According to Chinese state media Xinhua News, the illegal trafficking of fentanyl in China utilizes the internet and various parcel delivery services. These drugs are labeled as “detoxification” or “nourishing” supplements. For instance, one online store involved in fentanyl sales is called “Detoxification Specialties Store of Yunnan Province.” The drug dealers and buyers use a variety of payment methods to cover up their illegal transactions.

Investigations by a US Journalist and CBP

Ben Westhoff, an award-winning investigative journalist who writes about culture, drugs, and poverty, spent a year in China, disguised as a customer of fentanyl-related products. He contacted 17 sellers at Wuhan Yuancheng Corporation at different times, and even conducted an onsite interview in Wuhan in January 2018.

Then in February 2019, Westhoff contacted the Yuancheng boss Ye Chuanfa directly and revealed that he was a journalist. Ye did not deny the fact that his company sells precursors of fentanyl, yet he claimed that he did not know for what purpose his customers were buying them.

When Westhoff asked him why the company’s products have fake labels on the boxes to deceive the custom officials, Ye remained silent.

In his book published later that year “Fentanyl, Inc.: How Rogue Chemists Are Creating the Deadliest Wave of the Opioid Epidemic,” Westhoff wrote, “[Illicitly-produced] fentanyl is mostly made in China, and then sent directly to U.S. consumers through the mail, or funneled into the country by Mexican cartels.”

The amount of fentanyl intercepted along the U.S.-Mexico border can serve to confirm Westhoff’s conclusions. As of July, the fentanyl seized by the Texas Department of Public Security was 9.5 times the total amount seized in all of 2020—enough to kill 21 million people.

The U.S.-China Economic and Security Review Commission disclosed in its August report that China remains the primary country of origin for illicit fentanyl and fentanyl-related substances trafficked into the United States.

“In 2019, China fulfilled a pledge to the United States and placed all forms of fentanyl and its analogues on a regulatory schedule. Nevertheless, illicit fentanyl from China remains widely available in the United States,” the report said. “Chinese traffickers are using various strategies to circumvent new regulations, including focusing on chemical precursors, relocating some manufacturing to India, rerouting precursor shipments through third countries, and leveraging marketing schemes to avoid detection. China’s weak supervision and regulation of its chemical and pharmaceutical industry also enable evasion and circumvention.”

In 2019, CBP seized more than 2,660 pounds of illicit fentanyl from Mexico compared to 1,500 pounds in 2018. The Mexican government reported that seizures of illicit fentanyl at clandestine labs and ports increased six-fold in 2020, and the precursor chemicals originated from China, according to various official reports including the U.S.-China Economic and Security Review Commission.

‘Lack of morality [in China] is the fundamental factor’

Li Yuanhua, former associate professor of Education at China’s Capital Normal University, told The Epoch Times about China’s role in fentanyl trafficking. He said that in today’s China, people only care about profits and there is collusion between the government and businesses. “Lack of morality is the fundamental factor. Failure to comply with the law is simply the superficial manifestation,” Li said.

Li believes that government officials are fully aware of these illegal practices, yet are happy to provide protection to the perpetrators, because they receive huge bribes from the drug manufacturers and dealers.

“It is almost a government action. With the facilitation by corrupt officials, smuggling can flow unimpeded,” Li said. “The CCP thinks that China itself is not harmed by fentanyl, and it is happy to see the United States victimized. Therefore, the Chinese authorities pretend that they are not aware of the situation. The CCP truly has no bottom line when seeking profits and harming others, and it even thinks that doing such things is protecting China’s national interest.”