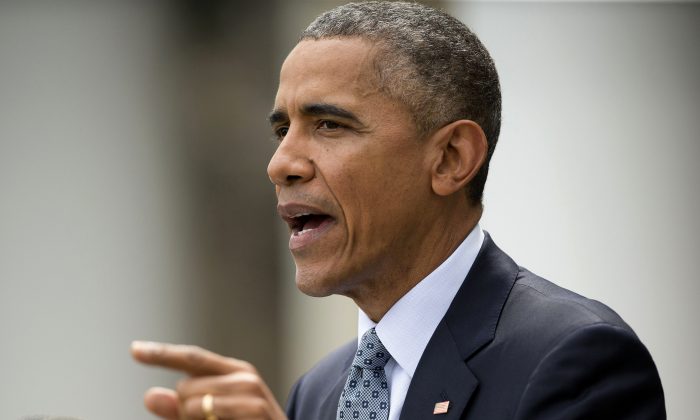 President Obama speaks in the Rose Garden of the White House in Washington on April 2, 2015. The framework nuclear deal sealed by world powers and Iran leaves major questions: Could Iran cheat? Possibly. Would the U.S. or anyone else be able to respond in time? In theory, yes. Are they prepared to use military force? Questionable. (AP/Pablo Martinez Monsivais)
US

US Finds Peeling Back the Iran Sanctions Onion No Easy Task

WASHINGTON—The Obama administration may have to backtrack on its promise that it will suspend only nuclear-related economic sanctions on Iran as part of an emerging nuclear agreement, officials and others involved in the process tell The Associated Press.

The problem derives from what was once a strong point of the broad U.S. sanctions effort that many credit with bringing Iran to the negotiating table in the first place.

Administration officials vehemently reject that any backtracking is taking place, but they are lumping sanctions together differently from the way members of Congress and critics of the negotiations separate them.

Under the sanctions developed over decades, hundreds of companies and individuals have been penalized not only for their role in the country’s nuclear program but also for ballistic missile research, terrorism, human rights violations and money laundering.

Now the administration is wending its way through that briar patch of interwoven economic sanctions.

The penalties are significant. Sanctioned foreign governments, companies or individuals are generally barred from doing business with U.S. citizens and businesses, or with foreign entities operating in the American financial system. The restrictions are usually accompanied by asset and property freezes as well as visa bans.

Negotiators hope to conclude a final nuclear deal by June 30. According to a framework reached in April, the U.S. will be required to lift sanctions that are related to Iran’s nuclear program but could leave others in place. President Barack Obama can suspend almost all U.S. measures against Iran, though only Congress can revoke them permanently.

“Iran knows that our array of sanctions focused on its efforts to support terrorism and destabilize the region will continue after any nuclear agreement,” Treasury Secretary Jack Lew told a gathering of American Jews in a weekend speech. U.S. officials will “aggressively target the finances of Iranian-backed terrorist groups and the Iranian entities that support them,” he said, including the Lebanese militant group Hezbollah and Iran’s Quds Force.

But that’s easier said than done.

The Treasury Department’s sanctions point man, Adam Szubin, has been tasked with sorting out the mess, according to U.S. officials, though no clear plan has yet been finalized.

Officials say the administration can meet its obligations because of how it interprets nuclear sanctions.

For example, they say measures designed to stop Iran from acquiring ballistic missiles are nuclear-related because they were imposed to push Iran into the negotiations. Also, they say sanctions that may appear non-nuclear are often undergirded by previous actions conceived as efforts to stop Iran’s nuclear program.

The officials who provided information for this story spoke only on condition of anonymity because they weren’t authorized to speak publicly on the private discussions.

After years of negotiations, U.S. officials believe a deal is within reach that for a decade would keep Iran at least a year from being able to build a nuclear weapon.

In return the U.S. would grant billions of dollars in relief from sanctions that have crippled Iran’s economy. But the whole package risks unraveling if the U.S. cannot provide the relief without scrapping sanctions unrelated to Iran’s nuclear program.

Administration officials say they’re examining a range of options that include suspending both nuclear and some non-nuclear sanctions, a step that would face substantial opposition in Congress and elsewhere. Under one scenario, the U.S. could end non-nuclear restrictions on some entities, then slap them back on for another reason. But Iran could then plausibly accuse the U.S. of cheating on its commitments.

Obama has spoken about Iran potentially recouping up to $150 billion in assets trapped overseas. The process for how that would take place is still being worked through, said officials.

The Iranian Central Bank may prove the most glaring example of the administration’s dilemma, and officials acknowledge there is no way to give Iran the sanctions relief justified by its compliance without significantly easing restrictions on the institution.

The bank underpins Iran’s entire economy, and for years the U.S. avoided hitting it with sanctions, fearing such action would spread financial instability and spike oil prices. By late 2011, with Iran’s nuclear program advancing rapidly, Obama and Congress did order penalties, declaring the bank a “primary money laundering concern” and linking its activity to ballistic missile research, terror financing and support for Syrian President Bashar Assad.

The effects were far-reaching. Petroleum exports fell by 60 percent, Iran suffered runaway inflation, cash reserves dried up and industrial output in several sectors plummeted. And Iran agreed to talk about its nuclear program with the United States and five other world powers.

Now that the nuclear agreement is so close, Iran wants these sanctions lifted. The administration officials say all sanctions on the bank are nuclear-related.

Lew told the Jewish conference in New York that a nuclear accord would include the suspension of all “secondary” oil, trade and banking restrictions — those that apply to U.S. and non-U.S. banks, as well as foreign governments.

Many of these measures overlap with American sanctions tied to Iran’s nuclear program, and that has officials considering new sanctions to keep certain Iranian institutions under pressure.

Eliminating the secondary sanctions across the board could have wide-ranging implications, making it easier for Iran’s Revolutionary Guard Corps and its police, intelligence services and paramilitary groups to do business.

That possibility has Iran’s rivals in the region, including Israel and the Sunni monarchies of the Middle East, gravely worried.

“If the deal is reached and results in sanctions relief, which results in more economic power and more purchasing power for the Iranian regime, it’s my expectation that it’s not all going to flow into the economy to improve the lot of the average Iranian citizen,” he said. “I think they will invest in their surrogates. I think they will invest in additional military capability.”

The Revolutionary Guard is under U.S. sanctions because of its proliferation of weapons of mass destruction. But because the U.S. views the Corps as so pernicious, the administration is considering new measures to help block it from meddling in the internal conflicts of Iraq, Lebanon, Syria and Yemen.

Of the 24 Iranian banks currently under U.S. sanctions, only one — Bank Saderat, cited for terrorism links — is subject to clear non-nuclear sanctions. The rest are designated because of nuclear and ballistic missile related financing, while several are believed to be controlled by the Revolutionary Guard.

Will they be cleared for business with the world? U.S. officials still can’t say one way or another. Congress, too, hasn’t received a list of banks and institutions that would be released from sanctions under the deal.

If the United States cannot deliver on its promises, it could take the blame for a collapse of the yearslong negotiations toward a nuclear deal, putting the world — in the words of Obama and other U.S. officials — on a path toward military confrontation. At the same time, an Iran unburdened by sanctions could redouble efforts toward nuclear weapons capacity, while international unity and the global sanctions architecture on Tehran frayed.