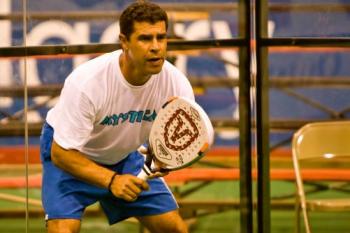 By Neil Campbell
Print
John Chun and Leo Contini of the U.S. are running hot and very excited after moving to the final 16 of the Men’s Open in the 2008 World Paddle Tennis Championships. The team devastated Portugal’s Ricardo Sores and Ricardo Ribero 6–0, 6–1 in round two to advance, and are the only remaining U.S. team in the Open.

“It was a pretty good competitive game, but our team, John and I, we figured out a way to play them,” said Contini.

Chun elaborated on their strategy: “Being from the U.S., we play a lot of hard court tennis which helped a lot. They were paddle players—we were a lot more aggressive. We didn’t give them time to play paddle.

“That’s the nice thing about paddle [tennis]. You don’t have to play paddle. You can play tennis and be aggressive and it helps to win, that’s what we did.”

Both Contini and Chun credited their win to solid play and efficient use of tactics.

“We didn’t make that many mistakes, that was a good combination between the right tactics and very, very few unforced errors,” said Contini.

Chun elaborated on the team’s tactics. “Our tactic was: my game is a really aggressive game, being an ex-tennis player. I can come in, hit the ball hard, and volley. [John], being a bit more of a paddle player, has good hands, he throws a lot and uses touch. He gives it the touch, I move in for the kill.”

Contini talked about their defense. “Also playing defense we just know that one of the players was pretty aggressive with the overhead so we tried to avoid him on the short board so that way we had a second chance to get it off the wall.”

In the Final 16, Contini and Chun have their work cut out for them as they face world champion Argentina’s top line team of Rodrigo Ovide and Fernando Cavaleri. But the pair remains optimistic.

“We’re playing better every match,” said Chun, who has been playing paddle for three years.

“It’s going to be a challenge, but we’re going to try our best and try to represent the U.S.”

Contini, who is originally from Argentina, notes the adversity the team faces when playing against Latin American teams where the sport is very popular.

“All the players are professional players. John and myself, we have to work a job and then we can play paddle.”

Chun added, “A lot of countries like Spain, Brazil, and Argentina, their players are not really amateur players, they’re more professional. They train five to six hours daily. For us we have to work and then when we get some free time we can play paddle.”

The duo, all smiles and laughs, are also members of Team USA’s entry to the Men’s Match Play event.