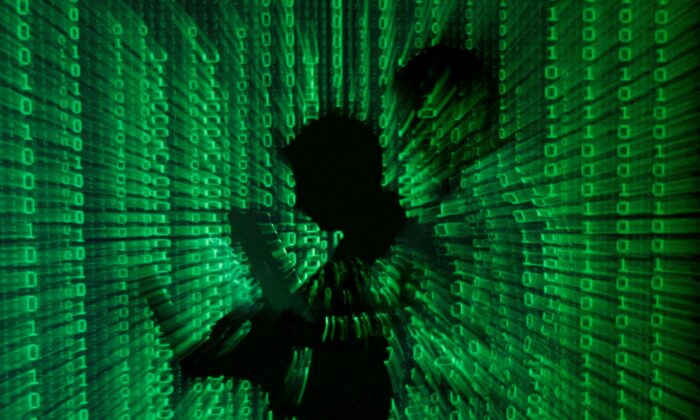 An illustration picture shows a projection of binary code on a man holding a laptop computer, in an office in Warsaw on June 24, 2013. (Kacper Pempel/Reuters)
US News

BOSTON—A U.S. prosecutor on Wednesday argued a Russian businessman accused of insider trading using hacked corporate information could use his wealth and Kremlin connections to flee the United States if he was granted bail.

Vladislav Klyushin, an owner of an information technology company with ties to the Russian government, had sought to be released from jail on a $2.5 million bond and remain under house arrest in a Boston apartment following his extradition from Switzerland on Saturday.

But during a hearing before U.S. Magistrate Judge Marianne Bowler, Assistant U.S. Attorney Seth Kosto argued the proposed bond, secured by cash and a London apartment, was something Klyushin “could easily walk away from.” Bowler did not immediately rule.

While Klyushin’s true wealth is unknown, Kosto said he owned a $4 million yacht, possessed a safe containing about $3 million in cash and was named on a Danish trading account from which $8.9 million was transferred out over 18 months.

Prosecutors say the account was used by Klyushin and others while making $82.5 million trading on yet-to-be-announced earnings reports obtained by hacking the networks of vendors that help companies file reports with securities regulators.

Kosto added that Klyushin, 41, was “not simply any Russian citizen.”

He said Klyushin received a medal of honor bearing Russian President Vladimir Putin’s signature and that his company, M-13, employed a former military intelligence officer involved in the hacking.

Kosto was referring to Ivan Yermakov, who is wanted by the U.S. government on 2018 charges that he and other intelligence officers carried out hacking schemes to interfere in the 2016 presidential election and target anti-doping agencies.

“That suggests (Klyushin) has connections that would facilitate his departure,” Kosto said.

Klyushin’s lawyer Maksim Nemtsev countered that many of his client’s assets have been frozen and that he had no intention to flee.

“He’s accused of crimes he fully intends to defend himself against,” Nemtsev said. Nemtsev in an email said Klyushin intends to plead not guilty at the next hearing on Jan. 3.