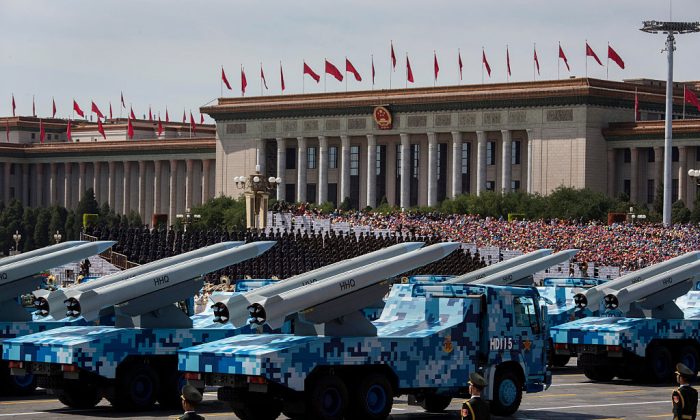 Chinese missiles are seen on trucks as they drive next to Tiananmen Square and the Great Hall of the People during a military parade in Beijing on Sept. 3, 2015. (Kevin Frayer/Getty Images)
US-China Relations

One of the defendants in an elaborate scheme to send U.S. chip technology with military applications to China was convicted by a federal court in Los Angeles on June 26.

Yi-Chi Shih, 63, a dual citizen of Taiwan and the United States, was arrested by the FBI in January 2018 for allegedly sending microchips to his contacts in China via Singapore, Hong Kong, and Canada, and by giving the chips to Air China pilots in Los Angeles for them to transport to China.

Prosecutors alleged that Shih conspired with California resident Kiet Anh Mai, a former employee of at U.S. defense contractor, and his brother Ishiang Shih, a professor at McGill University in Canada. All three of them were named as defendants in a February 2018 indictment.

Shih was an adjunct professor at UCLA, according to his LinkedIn page.

On June 26, after a three-week court trial, Shih was found guilty on 13 counts, including conspiring to export chips to China for the purpose of providing military technology to the Chinese firm Chengdu Gastone Technology (CGTC), without first obtaining the required licenses from the U.S. Department of Commerce, according to court documents.

Shih transported to CGTC were MMIC (monolithic microwave integrated circuits) microchips. MMICs are used for electronic warfare, radar, and military communications, among other applications. Court documents showed that directors at CGTC planned to use the MMICs for missile guidance.

In one count, Shih was found guilty of sending at least one Cree MMIC from California to Hong Kong via the courier service DHL in January 2014.

Prosecutors said Shih and his accomplice Mai conspired to provide Shih with unauthorized access to a protected computer belonging to Cree that manufactured MMICs.  Shih was found guilty on this count.

Meanwhile, Mai has pleaded guilty to a federal smuggling charge for her role in the scheme, and is scheduled for sentencing in September.

A government forfeiture request has also been set for Shih, for more than $750,000. The ruling is set for next week.

In 2014, the U.S. Department of Commerce added CGTC to its Entity List. Companies on that list are not allowed to do business with U.S. firms unless it obtains approval for a special license. The Department found CGTC to have been “involved in the illicit procurement of commodities and technologies for unauthorized military end use in China.”

CGTC was established in 2010 with funding from Beijing. In 2011, it tried to hire Shih as its chairman, for the goal of boosting the newly-founded company’s semiconductor manufacturing capacity, according to reports by Taiwanese media.

CGTC’s general manager Gao Negwu was formerly a senior researcher at the No. 19 Institute run by China Electronics Technology Group Corporation, a state-owned firm, according to Taiwanese magazine Wealth. The Institute, which focuses on research in radar, satellite, and space telecommunications, is part of China’s national team for military technology development.