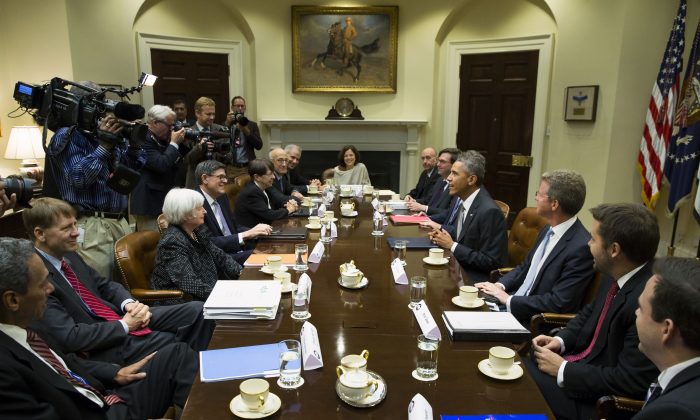 US Federal Budget Deficit Falls to $486B

It comes as Congress has mostly paused in its wrangling over the deficit in the run-up to the midterm elections next month.

Obama inherited a trillion-dollar-plus deficit after the 2008 financial crisis but that red-ink figure has improved in recent years as the economy has recovered. Last year’s deficit registered at $680 billion.

The government registered deficits exceeding $1 trillion during Obama’s first term, but the recovering economy has boosted revenues while Republican-imposed curbs on agency operating budgets have combined to shrink the deficit.

The Treasury Department and the White House budget office will issue an official report on the budget in the next week or so, but their findings are likely to mirror CBO’s data, which is based on the daily cash flow that Treasury reports.

The good news may be temporary. CBO and budget hawks warn that the retirement of the Baby Boom generation will balloon deficits in coming years unless Washington can bridge its divides and curb the growth of expensive programs like Medicare.

While the numbers are large, economists agree that the truest measure of the deficit is to compare it to the size of the economy. By that measure, the 2014 deficit was less than 3 percent of gross domestic product, which economists say is sustainable.

But CBO and other budget officials warn that long-term projections are unsustainable as more and more people claim Social Security and Medicare benefits. The growth in health care spending, however, is down and long-term estimates have proven unreliable.

Obama and his GOP rivals combined to curb agency budgets in 2011 and the president won a tax increase on upper-rate taxpayers last year, but any future action on the government’s budget woes will likely have to wait until after this year’s mid-term elections or beyond.