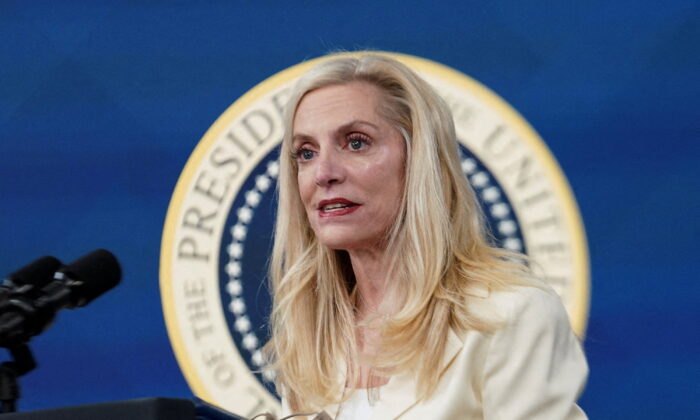 Federal Reserve board member Lael Brainard speaks after she was nominated by President Joe Biden to serve as vice chair of the Federal Reserve, in the Eisenhower Executive Office Building’s South Court Auditorium at the White House on Nov. 22, 2021. (Kevin Lamarque/Reuters)
Business & Economy

President Joe Biden’s nominees to the Federal Reserve moved a step closer to confirmation Thursday after Senate Majority Leader Chuck Schumer entered procedural motions for two of them, setting up for a potential vote after lawmakers return from Easter Break on April 25.

The filing of the motions on Michigan State University’s Lisa Cook, nominated to fill a vacant seat on the Board, and Fed Governor Lael Brainard, nominated to be the Fed’s vice chair, limits the time for floor debate and starts the clock toward a confirmation vote.

A final vote on all four Fed nominees could take place as soon as late April, just days before the Fed is expected to deliver a large interest rate increase and begin shrinking its massive bond holdings in a double-barreled effort to fight decades-high inflation.

Both Jerome Powell, who has been nominated for a second terms as Fed Chair, and Davidson College dean of faculty Philip Jefferson, nominated to a vacant seat on the Board, have drawn bipartisan support and their confirmations are expected to sail through the Senate, split evenly between Republicans and Democrats.

Brainard and Cook, however, drew significant Republican opposition at the Senate Banking panel, with all Republicans voting against Cook and eight of 12 voting against Brainard. Cook’s nomination was later brought to the full Senate through an additional parliamentary maneuver.

Still, with Vice President Kamala Harris on hand to break any potential tie, both are also expected to be ultimately confirmed.

Biden must still make a decision on who to put forward for the board’s final opening, the vice chair for supervision. His first nominee for the country’s top bank oversight role—Sarah Bloom Raskin—withdrew after Republicans stymied a committee vote on her and a swing-vote Democrat announced his opposition.