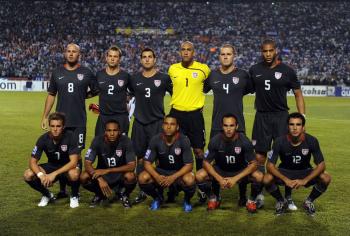 Rahul Vaidyanath
Journalist
Rahul Vaidyanath is a journalist with The Epoch Times in Ottawa. His areas of expertise include the economy, financial markets, China, and national defence and security. He has worked for the Bank of Canada, Canada Mortgage and Housing Corp., and investment banks in Toronto, New York, and Los Angeles.
View profile
Follow
biggersmaller
Print
The United States obtained a favorable draw on Friday after being grouped with England, Algeria, and Slovenia for the 2010 World Cup in South Africa.

While England is the strongest team in the group, Algeria and Slovenia have to be considered very beatable teams.

“We feel that this is a group that gives us a real fair chance to move on,” said U.S. head coach Bob Bradley in an interview with ESPN shortly after the draw.

When asked about the first game against England on Saturday, June 12 in Rustenberg, Bradley said: “It’s a great way to start. It’s a big challenge, gives it a real special start.”

The only time the U.S. has ever faced England in World Cup play was in 1950 in Brazil. The U.S. recorded a historic 1–0 win, which is considered the greatest accomplishment in U.S. soccer history.

The June 12 matchup could see L.A. Galaxy teammates Landon Donovan and David Beckham facing off. A handful of Americans play in the English Premier League, including striker Clint Dempsey and goalkeeper Tim Howard.

After England, the U.S. will face Slovenia on June 18 in Johannesburg and finally Algeria in Pretoria on June 23.

The U.S. gained solid experience at last summer’s Confederations Cup in South Africa. They reached the final, only to lose to Brazil after being up two goals. Along the way, the U.S. stunned Spain in the semifinal.

While the U.S. is not looking past the group stage, it is worth pointing out that, should they finish second in the group and move on to the round of 16, a matchup against Germany would be most likely.