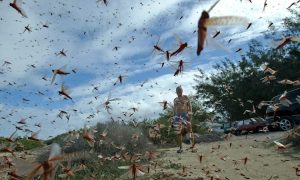 'We Are Walking on Locust Carpets': Plague of Locusts Destroy Crops in Italy
0 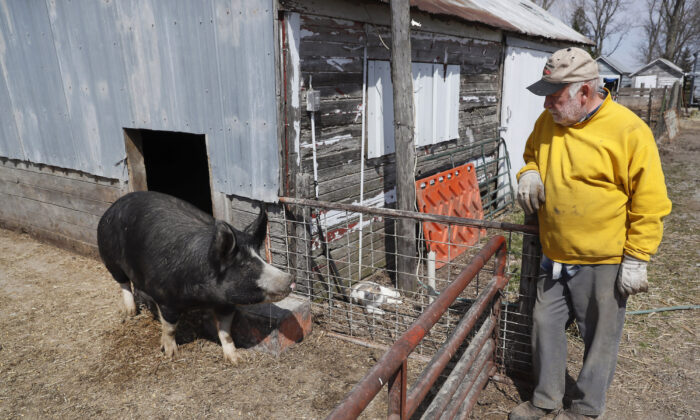 Hog farmer Chris Petersen looks at a Berkshire hog in a pen on his farm, near Clear Lake, Iowa, on April 17, 2020. (Charlie Neibergall/AP Photo)
US News

US Farmers Under Pressure as Supply Chains Struggle to Adapt

American farmers are under financial pressure as food supply chains struggle to adapt to the changes brought by the CCP virus, with some forced to destroy crops, dump milk, and even kill livestock.

“Having to dump milk or plow under vegetables ready to market is not only financially distressing but it’s heartbreaking as well for those that produce them,” said Department of Agriculture Secretary Sonny Perdue at a recent White House press conference.

A number of large meat-processing facilities have been forced to close due to outbreaks of the CCP virus among employees. Some of those facilities are capable of processing up to 20,000 hogs per day. Their closure creates an instant backlog that can’t easily be redistributed to other plants. The industry as a whole can process between 10 and 12 million animals per month.

Many American hog farmers are now facing harrowing choices, with millions of slaughter-ready hogs accumulating on farms as many pork markets stop running. According to the Associated Press, a number of farmers have already resorted to euthanizing piglets to avoid feed and veterinary costs and to reduce the possibility of ending up with unsellable mature animals.

Losses in the U.S. pork industry could reach an estimated $5 billion, as pork and bacon destined for restaurants and catering outlets cannot easily be repackaged and sold in supermarkets. Hotels, restaurants, and catering companies use up to 25 percent of U.S. pork, and three-quarters of the nation’s bacon.

The lockdown has caused a significant disruption to the traditional food supply chain.

Mark Allen, chief executive of The International Foodservice Distributors Association told MarketWatch that the CCP virus has brought about a decline in sales of 60 to 90 percent in the $300 billion foodservice industry. “I think the supply chain will look fundamentally different coming out of this” he said.

Corn has a broad range of applications, including as an ingredient in most processed foods in the form of starch and high-fructose corn syrup. The vast majority of U.S. corn, however, is used either as livestock feed or to make ethanol for automotive fuels.

Unprecedented market conditions saw the price of crude oil futures turn negative this week, which also had a knock-on effect on the price of corn and, thus, other cereal products. A number of ethanol plants slowed or stopped production in April due to low oil prices.

Here is the monthly log chart of Corn. Horrific. It probably gets to $200. pic.twitter.com/oQrvalGR8T

U.S. corn futures fell at the end of March as the USDA forecast that 2020 corn plantings were on schedule to be the largest in eight years, though the number of acres under soybeans declined slightly.

With a long growing season and uncertain market conditions at harvest, most farmers have already received deliveries of seed, fertilizer, and chemicals, and must now plant their crops and hope that market conditions will have firmed by the fall.

On Friday, the Department of Agriculture at the direction of Trump launched a $19 billion relief program “to provide critical support to our farmers and ranchers, maintain the integrity of our food supply chain, and ensure every American continues to receive and have access to the food they need.” It aimed to compensate U.S. farmers for losses incurred during the CCP virus crisis.

The package included $16 billion in payments to producers and large-scale purchases of dairy products, meat, vegetables, and other foods.

I have directed @SecretarySonny to expedite help to our farmers, especially to the smaller farmers who are hurting right now. I expect Secretary Purdue to use all of the funds and authorities at his disposal to make sure that our food supply is stable, strong, and safe….

The department will also purchase $3 billion of these foodstuffs which will then be distributed to aid organizations, churches, and food banks to help feed American families struggling to make ends meet.