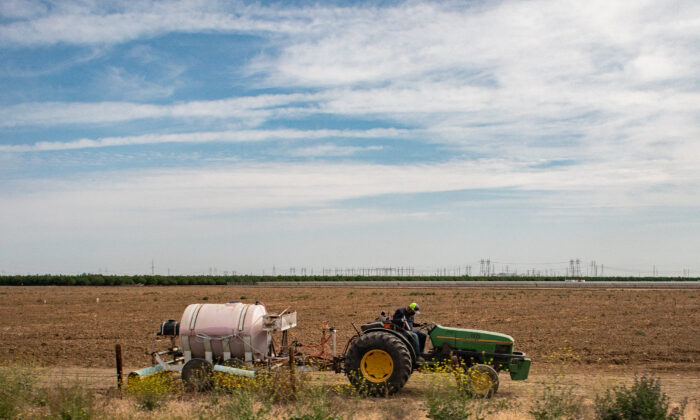 A farmer uses a tractor outside of Sacramneto, Calif on April 18, 2022. (John Fredricks/The Epoch Times)
Inflation

Production costs are expected to grow by at least 30 percent this year, a survey shows, signaling more food inflation ahead
By Emel Akan

Despite strong commodity prices, farmer sentiment in the United States deteriorated sharply in May as producers are anxious about their farm’s financial health and prospects.

The rapid rise in production costs and uncertainty regarding the direction of input prices have been important contributors to the drop in sentiment. About 44 percent of farmers, according to the monthly survey, cited input costs as their biggest concern for the coming year.

Nearly 6 out of 10 farmers predict farm input prices to be at least 30 percent higher this year compared to 2021.

The increase in input prices has been substantially larger than the general inflation seen in farm products so far, according to Michael Langemeier, professor at the department of agricultural economics at Purdue University and co-author of the AG Economy Barometer report.

That’s why farmers “certainly think that general inflation is going to persist for the next 12 months,” Langemeier told The Epoch Times.

On top of this year’s massive price hikes, nearly four out of 10 farmers estimate input prices to rise by 10 percent or more in 2023, according to the survey.

The two most important farming inputs are diesel and fertilizer. Prices of both have risen significantly in the last year and the Russian invasion of Ukraine has further disrupted both markets. Hence, farmers are not expecting price relief anytime soon, according to Langemeier.

U.S. farmers are highly concerned about the possibility of experiencing a price-cost squeeze in the coming years, which refers to the situation in which costs remain high while output prices decrease.

Farmers presently have a strong balance sheet, Langemeier noted, but “they could be facing a price-cost squeeze, particularly in 2023,” he said.

The university conducted the survey with 400 agricultural producers from around the nation, who are typically small farms, sole proprietors or partnerships, or small family-owned businesses.

About 21 percent of respondents cited climate, environment, and farm policies as their biggest concerns, according to the survey. Some farmers also cited the availability of inputs (19 percent) and lower crop or livestock prices (18 percent) as top concerns.

Despite the negative sentiment, there’s a lot of optimism when it comes to the value of farmlands.

“The contrast between farmers’ relatively optimistic view of farmland values and their expectations for weak farm financial performance continues to be a bit of a puzzle,” according to the survey report.

Respondents who anticipate an increase in farmland values over the next five years regularly cite non-farm investor demand as the leading factor, followed by inflation.

In recent years, billionaires, global firms, and investment funds have been aggressively purchasing farmlands. Microsoft co-founder Bill Gates, for example, has quietly amassed approximately 270,000 acres of farmland across the United States, according to media reports.

Langemeier believes there are numerous reasons for the high demand for investment in farmlands, one of which is that “farmland returns are not correlated with stock returns,” making them attractive assets.

It’s especially intriguing for investment funds, he noted, because they’re similar to dividend-paying stocks in that they get a cash rent every year as well as the possibility of land appreciation.

“The return on farmland has been pretty good over a long period of time,” Langemeier added.

The survey, however, revealed a worrying trend in capital expenditures, which has the potential to reduce agricultural productivity in coming years.

Despite having high cash flow, the vast majority of farmers (78 percent) believe it is a bad time to invest in things like machinery and buildings. Supply chain disruptions have impacted machinery purchase plans in particular. According to the survey, low farm machinery inventory levels have pushed up prices, making investment less appealing for farmers this year.

Wheat prices, up 60 percent over the last year, present an opportunity for American farmers. The invasion of Ukraine has threatened the global wheat supply in recent months and many experts have warned that the shortage might trigger a global food crisis.

Part of the issue with all agricultural commodities is that farmers only produce one crop per year, according to Langemeier, making it difficult for American producers to swiftly react to rising prices.

However, he believes farmers will plant more wheat this fall in response to the increased prices.