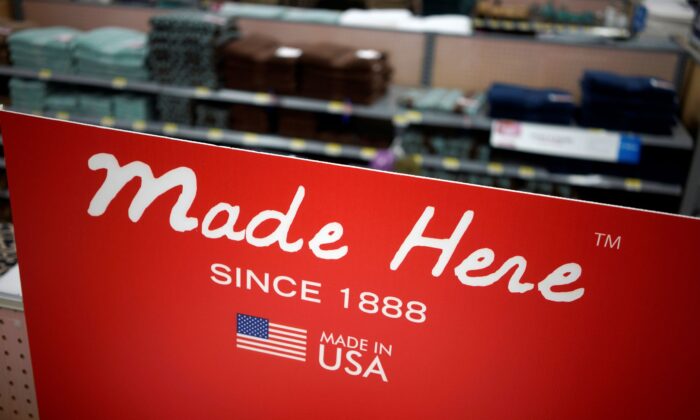 A sign advertising towels made in the United States is seen at the Walmart Supercenter in Bentonville, Ark., on June 5, 2014. (Rick Wilking/Reuters)
Economy

WASHINGTON―New orders for U.S.–made goods accelerated in August, pointing to sustained strength in manufacturing even as economic growth appeared to have slowed in the third quarter because of shortages of raw materials and labor.

The Commerce Department said on Monday that factory orders increased 1.2 percent in August. Data for July was revised higher to show orders rising 0.7 percent in July instead of gaining 0.4 percent as previously reported. Economists polled by Reuters had forecast factory orders gaining 1.0 percent.

Orders shot up 18.0 percent on a year-on-year basis.

Manufacturing, which accounts for 12 percent of the economy, is being driven by still-strong demand for goods despite spending shifting back to services. Businesses are rebuilding inventories, which were depleted in the first half, underpinning activity at factories.

An Institute for Supply Management survey last week showed manufacturing activity steadily expanding in September, but noted that “companies and suppliers continue to deal with an unprecedented number of hurdles to meet increasing demand.”

According to the survey all industries were “impacted by record-long raw materials lead times, continued shortages of critical materials, rising commodities prices and difficulties in transporting products.”

Input shortages and the resulting high prices, worsened by the latest wave of COVID-19 infections, driven by the Delta variant, likely caused a sharp slowdown in gross domestic product growth in the third quarter.

Data last Friday showed high inflation sharply cutting into consumer spending in July, with a moderate rebound in August. The Atlanta Federal Reserve is forecasting GDP growth braking to a 2.3 percent annualized rate in the third quarter. The economy grew at a 6.7 percent pace in the second quarter.

The increase in factory goods orders in August was led by computers and electronic products, fabricated metal products, transportation equipment as well as electrical equipment, appliances, and components. But there were decreases in machinery and primary metals orders.

The Commerce Department also reported that orders for non-defense capital goods, excluding aircraft, which are seen as a measure of business spending plans on equipment, gained 0.6 percent in August instead of advancing 0.5 percent as reported last month.

Shipments of these so-called core capital goods, which are used to calculate business equipment spending in the GDP report, rose 0.8 percent. Core capital goods shipments were previously reported to have increased 0.7 percent in August.

Business spending on equipment was robust in the second quarter, notching the fourth straight quarter of double-digit growth. That contributed to hoisting the level of GDP well above its peak in the fourth quarter of 2019.