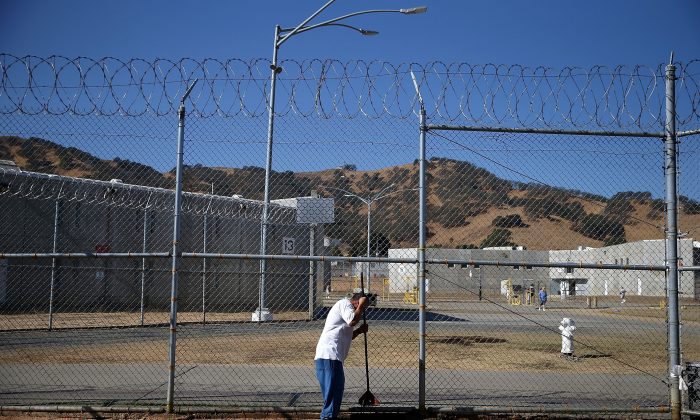 VACAVILLE, CA - OCTOBER 19: A California State Prison-Solano inmate uses a hand tool to pack decomposed granite while installing a drought-tolerant garden in the prison yard on October 19, 2015 in Vacaville, California. Inmates at California State Prison-Solano installed a drought-tolerant garden as part of the Insight Garden program that teaches inmates environmental and gardening skills. The garden will be watered using reclaimed water from the prison's kitchen. (Photo by Justin Sullivan/Getty Images)
US

WASHINGTON—In the last two months, two Minnesota men have admitted they plotted to travel to Syria to fight alongside ISIS, a New Jersey man pleaded guilty to helping his brother fly to the Middle East to join extremists, and a 20-year-old intercepted at a Chicago airport took responsibility for backing the terror group.

The defendants, among dozens arrested in the last year, will ultimately be released into the society they railed against. Even as the Obama administration launches programs to keep young adults from embracing extremist messages in the first place, there’s broad agreement that more needs to be done to de-radicalize terror suspects who entered prison after absorbing the violent ideology of the Islamic State in Iraq and Syria (ISIS) and will someday return to neighborhoods.

“Not addressing these issues in the correctional facilities, you run the risk of the person being more of an extremist” than before, said John Cohen, a Rutgers professor of criminal justice and former counterterrorism coordinator at the Homeland Security Department.

Concerns about prisoner rehabilitation obviously aren’t limited to terror suspects, but the issue has gained fresh attention as the FBI continues its arrests of American supporters of the ISIS group. The FBI and Justice Department, acknowledging that prosecutions aren’t the entire answer, have begun discussing more openly the need for community and family intervention before legal trouble occurs, and for ensuring convicts have access to services before rejoining their communities.

The Bureau of Prisons holds about 350 prisoners with a history of, or connection to, international terrorism, said spokesman Ed Ross. Only a fraction will remain imprisoned for life. Nearly 100 of them are due for release within five years.

“We don’t have the same resources in place now of established groups in the community, nonprofit groups who have an expertise in this area—and it’s where we need one,” Carlin said.

The bureau says it works to ensure radical ideas aren’t being spread in prisons, and it offers job training, education, and substance abuse treatment for all inmates, Ross said. But none of that is tailored for the relatively small population of terror-related convicts.

Many are charged with providing material support to a foreign terror organization, which carries a maximum 15-year punishment, though guilty pleas often result in lighter punishments.

Sentences for ISIS suspects vary. Many are charged with providing material support to a foreign terror organization, which carries a maximum 15-year punishment, though guilty pleas often result in lighter punishments. In Illinois, prosecutors on Oct. 29 recommended a 5-year sentence for Mohammed Hamzah Khan, who pleaded guilty to trying to join extremists abroad, and called for him to receive counseling and to consent to searches of his electronic devices during a supervised-release period.

Though interest in de-radicalization efforts has grown, there’s no evidence that prisons are a breeding ground for jihadist ideology, and none of the relatively few terror-related defendants already released from U.S. prisons has returned to terrorist plotting, Jerome Bjelopera, a Congressional Research Service expert, told a House subcommittee exploring the issue.

It’s also not clear what an ideal de-radicalization program would look like or whether a uniform approach would work for such a varied population, which includes those whose crime was helping a friend travel to the Middle East as well as those who plotted attacks themselves.

Some experts see similarities in viewpoint and background between terror defendants and the thousands of other extremists, including white supremacists, in American prisons. They say any de-radicalization effort must span the ideological spectrum, both because of those parallels and because of constitutional concerns about focusing on members of one particular religion.

“While we very well may have to engage in a variety of rehabilitative and monitoring programs, it is crucial that they apply across the board to the vast threat,” Brian Levin, an expert on extremist ideology at California State University–San Bernardino, told members of Congress. Focusing too narrowly could mean missing other ideological threats, he said.

Some European nations have taken a different approach.

Jacob Bundsgaard, the mayor of Aarhus, Denmark, said his city has a program for returning fighters aimed at helping them exit Islamist radicalized groups.

“These are typically young people that are either very religious or very interested in religion. We try to provide them with a way of expressing their faith in a manner that is acceptable to society,” he said.

A federal judge in Minnesota this year allowed creativity in the case of a teenager who was stopped at the airport as prosecutors say he was attempting to travel abroad to join ISIS.

U.S. District Judge Michael Davis initially allowed 19-year-old Abdullahi Yusuf, who pleaded guilty earlier this year, to live at a halfway house pending sentencing, provided he participate in a program aimed at helping disaffected youth connect with their communities. Yusuf was returned to custody on a halfway house violation, but is still participating in the program—meeting with a mentor, counselor, and completing assignments.

His attorney, Manny Atwal, said she believes Yusuf had acted out of immaturity and called his response to the program “extraordinary.”

Mohammed Noor, executive director of Confederation of Somali Community in Minnesota, said he would support a program to help rehabilitate teenagers who’ve embraced violent ideologies but that it would take time to build a successful program with community backing.

“Something has to be there for them, so when they return they are able to integrate back into society,” he said.