US Faces Nuclear Threats From China, Russia as Never Before: US Admiral 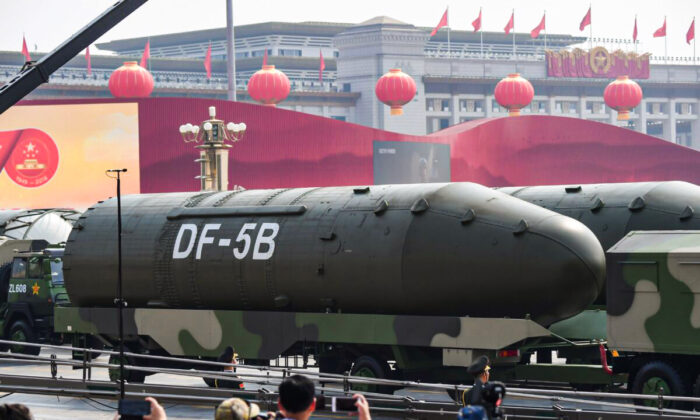 Adm. Charles Richard, head of the U.S. Strategic Command, said it has become imperative for the United States to have the capability to defend against Russia and China at the same time.

“Today, we face two nuclear-capable near-peers who have the capability to unilaterally escalate a conflict to any level of violence in any domain worldwide, with any instrument of national power, and that is historically significant,” Richard told the House Armed Services Committee on March 1.

He pointed out that while the need to deter both China and Russia at the same time was only at the level of major concern in April last year, the concern “has now become a reality.”

“That need is now an imperative.”

In April 2021, he told lawmakers at another congressional hearing (pdf) that the United States for the first time in history was “on a trajectory to face two nuclear-capable, strategic peer adversaries at the same time.”

Months later, he said the United States was “witnessing a strategic breakout by China,” adding that the Chinese regime’s “explosive growth and modernization of its nuclear and conventional forces” was “breathtaking.”

“Last fall, I formally reported to the secretary of defense, the PRC’s [People’s Republic of China] strategic breakout,” Richard said. “Their expansion and modernization in 2021 alone is breathtaking.”

China and Russia pose a threat to the United States now more than ever, as the two neighboring countries currently boast a “no-limits” partnership, according to a statement released following a meeting between Russian President Vladimir Putin and Chinese leader Xi Jinping on Feb. 4.

In November 2021, the Pentagon warned that China might have as many as 1,000 deliverable nuclear missiles by 2030.

So far, China hasn’t slowed down in its pursuit of hypersonic weapons, according to Gen. Glen VanHerck, head of the U.S. Northern Command.

“They’re aggressively pursuing hypersonic capability, tenfold to what we have done as far as testing within the last year or so, significantly outpacing us with their capabilities,” he said at the hearing.

As for the current U.S. defensive posture, Richard said he felt quite confident.

“I am satisfied with the posture of my forces. I have made no recommendations to make any changes,” he said. “The nation’s nuclear command and control is in its most defended, most resilient lineup that it’s ever been in its history.”

“While I’m very confident we’re going to wind up with a very good strategy, I think it will need to be a question that we continue to ask ourselves as we see where China goes, as we see where others go. What are the overall capability and capacity that the United States requires in order to execute that strategy against a changing threat.

“We’re going to have to ask that question much more frequently than we have in the past.”