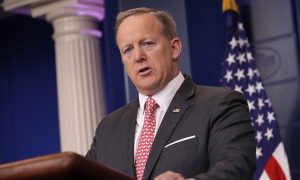 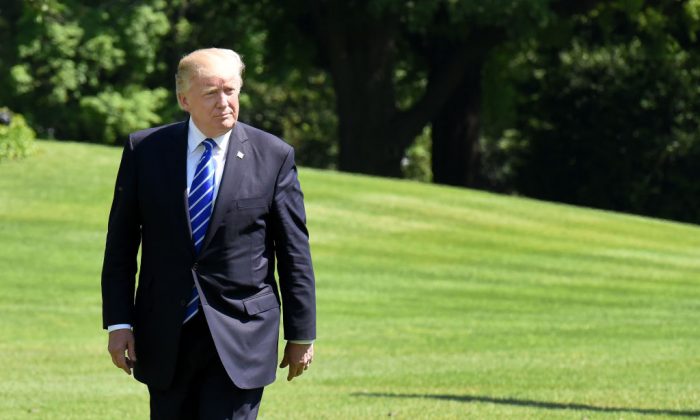 President Donald Trump returns to the White House, in Washington on May 17, 2017. (OLIVIER DOULIERY/AFP/Getty Images)
International

WASHINGTON—President Donald Trump on Wednesday extended wide sanctions relief for Iran called for under a 2015 international nuclear deal even as he imposed narrow penalties on Iranian and Chinese figures for supporting Iran’s ballistic missile program.

The dual actions, announced by the Departments of State and Treasury, appeared intended to signal a tough stance on the Iranian regime even as Trump continued predecessor Barack Obama’s pact under which Iran agreed to limit its nuclear program in return for sanctions relief.

While Trump criticized the nuclear agreement as a presidential candidate – at one point saying he would “dismantle the disastrous deal with Iran”—Wednesday’s actions demonstrated that he has decided, at least for now, to keep it.

“The United States continues to waive sanctions as required to continue implementing U.S. sanctions-lifting commitments in the Joint Comprehensive Plan of Action,” the State Department said in a statement, referring to the deal by its formal name.

The designation of the seven Iranian and Chinese people and companies blocks any assets they might have in the United States and bars Americans and non-Americans from doing business with them, at the risk of being blacklisted by the United States.

The decision on the sanctions waiver represented a major early policy choice on the nuclear deal for the Trump administration, which has said that it is engaged in a wider policy review on how to deal with Iran.

Iran holds a presidential election on Friday with President Hassan Rouhani, a pragmatist cleric whose administration reached the nuclear deal, battling a conservative challenger and trying to convince voters he can deliver economic growth.

The Iranian government and some Iranian citizens have been disappointed that U.S., European Union and United Nations sanctions relief provided so far under the nuclear deal has failed to spark an economic renaissance.

The United States on Wednesday renewed a waiver of the key, and most punitive, sanctions that it imposed on Iran before the nuclear deal was ultimately struck.

Under these sanctions, tucked into Section 1245 of the 2012 National Defense Authorization Act, the United States threatened to sanction the banks of Iran’s main oil customers if they did not significantly reduce their purchases of Iranian crude.

Under the law, these sanctions can be waived for a maximum of 120 days. The Obama administration did so in mid January, forcing the Trump administration to decide by Wednesday whether to renew them or to put the wider Iran deal at risk.

Richard Nephew, a former U.S. negotiator with Iran now at Columbia University, called the renewal an “important step” in maintaining the deal but said it was still threatened by “congressional pressure, Republican politics, and the views of many people” in the Trump administration.

Mark Dubowitz, chief executive of the Foundation for Defense of Democracies nonprofit policy group and an opponent of the Iran nuclear deal, argued that the Trump administration was pursuing a “waive and slap” approach that temporarily suspends some sanctions while imposing others.

“It’s a clear message to foreign banks and companies looking to do business with Iran: You will be taking significant risks if you deal with a regime engaged in continued malign conduct and still covered by a web of expanding non-nuclear sanctions,” he said.