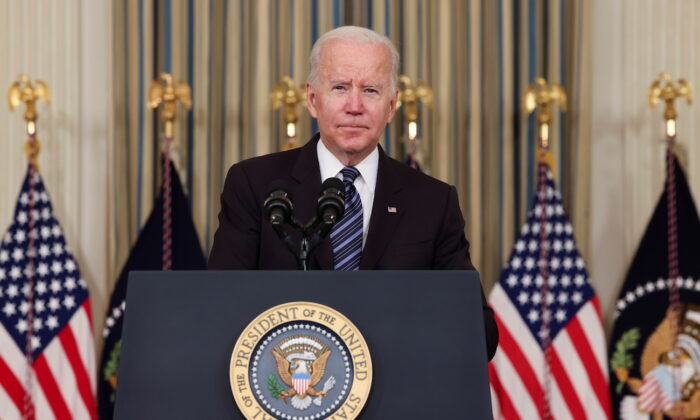 President Joe Biden looks on as he delivers remarks on the October jobs report at the White House in Washington, on Nov. 5, 2021. (Evelyn Hockstein/Reuters)
US-China Relations

US Extends Ban on Investments in Firms Tied to Chinese Military

“The PRC [People’s Republic of China] is increasingly exploiting United States capital to resource and to enable the development and modernization of its military, intelligence, and other security apparatuses, which continues to allow the PRC to directly threaten the United States homeland and United States forces overseas,” Biden wrote in a letter to House of Representatives Speaker Nancy Pelosi on Tuesday.

The executive order that the then-President Donald Trump issued last December blocked investors, including U.S. investment firms and pension funds, from buying shares of Chinese entities that the Department of Defense deemed to be “owned or controlled by” the Chinese military.

Biden in June expanded on the scope of the restrictions, tasking instead the Treasury Department to select targeted entities and update on a rolling basis a blacklist that currently covers 59 Chinese firms.

Those under the trade ban include telecom network suppliers Huawei and ZTE, and state-owned video surveillance manufacturer Hikvision. All three firms have been under scrutiny for their roles in contributing to Beijing’s expansive surveillance apparatus targeting ethnic minorities in Xinjiang, as well as their ties to the Chinese military. The blacklist also includes China’s leading semiconductor maker Semiconductor Manufacturing International Corp. (SMIC) and national oil company CNOOC.

Under the national strategy known as “civil-military fusion,” Beijing has been leveraging private sector technological innovations to advance its defence capabilities.

Following recent reports of China’s test of a hypersonic weapon, 17 Republican lawmakers wrote to the Secretary of Commerce Gina Raimondo over concerns that the regime may have co-opted U.S.-developed technologies to create the weapons system.

“China’s policy of military-civil fusion is leading to the inclusions of new technologies for their military,” Rep. Mike Waltz (R-Fla.), a signatory to the letter, told The Epoch Times at the time.

Innovation related to heat resistance, precision navigation, and artificial intelligence as some of the critical Western technologies in danger of falling into the regime’s hands, Waltz said.

Biden said China’s military-industrial complex and the use of Chinese surveillance technology to facilitate repression “continue to constitute unusual and extraordinary threats” to America’s national security, foreign policy, and economy.

Biden’s new list in June added about 10 publicly listed companies, but removed some other top names including Commercial Aircraft Corp of China (COMAC), which is spearheading efforts to compete with Boeing Co and Airbus, and two that challenged the ban in court—Gowin Semiconductor Corp and Luokung Technology Corp.