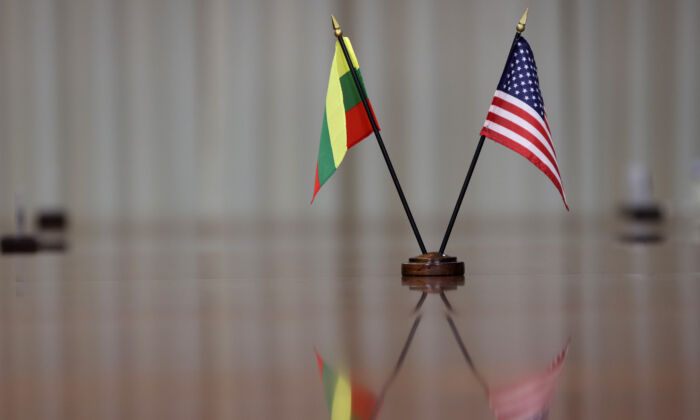 U.S. and Lithuanian flags on the table during a meeting between Defense Minister Arvydas Anusauskas and U.S. Secretary of Defense Lloyd Austin at the Pentagon in Arlington, Va., on Dec. 13, 2021. (Alex Wong/Getty Images)
Europe-China Relations

US Expresses ‘Ironclad Solidarity’ With Lithuania Over Chinese Economic Coercion

The United States has expressed “ironclad U.S. solidarity” with Lithuania in its pushback against Beijing—diplomatically and economically—amid souring bilateral relations.

During a phone call with Lithuanian Prime Minister Ingrida Simonyte on Dec. 21, U.S. Secretary of State Antony Blinken noted troubling public reports that Chinese customs authorities have refused to import or clear goods from the Baltic nation, according to the State Department.

“The Secretary underscored ironclad U.S. solidarity with our NATO Ally and EU partner Lithuania,” the department said in a statement.

“The Secretary underscored that such measures would raise serious concerns, including under international trade principles, and appear to constitute a form of economic coercion,” the statement reads.

Simonyte thanked Blinken over the phone for the support and solidarity of the United States.

“It’s important for all partners in the EU, the United States, and Indo-Pacific to work together to counter acts of coercion,” she wrote in a Twitter post.

The Baltic nation’s regional and economic stability is facing challenges from the Chinese regime for allowing self-ruled Taiwan, which Beijing claims as a runaway province, to open a de facto embassy in its capital Vilnius. In response, the regime recalled its ambassador in August before downgrading the diplomatic relations and expelled Lithuania’s top representative to China in November.

Beijing has imposed a trade embargo over Lithuanian exports and imports, and has threatened multinationals to sever ties with Lithuania or face being shut out of the Chinese market. For example, the Asian economic power has told Continental AG, the German car parts giant, to stop using Lithuanian-made components.

🇺🇸 @SecBlinken in a call with 🇱🇹 PM @IngridaSimonyte reaffirmed the U.S. commitment to work with like-minded countries to push back against the PRC’s coercive behavior. https://t.co/OjqajdWYjK

Lithuania, a member state of the European Union and Eurozone, has won U.S. support in its financial dispute with China.

The Export–Import Bank of the United States signed a $600 million export credit agreement with Lithuania on Nov. 24, in a bid to boost economic cooperation between the two nations and withstand increased pressure from the Chinese regime.

Vilnius announced last week that it had withdrawn its remaining diplomats from Beijing and would operate the embassy in China remotely.

The Baltic nation earlier this month joined the diplomatic boycott of the 2022 Beijing Winter Olympics.