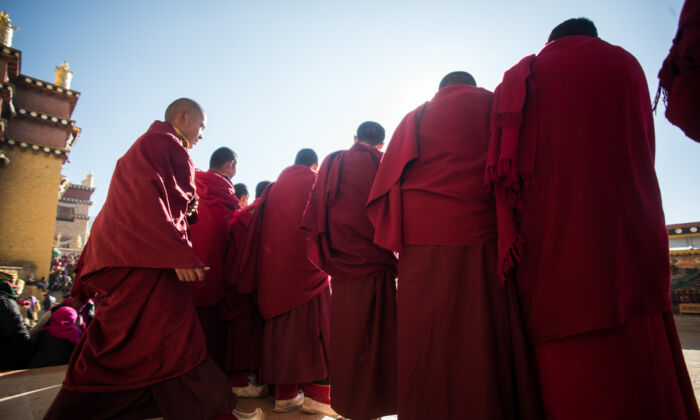 Lamas are watching the Cham dance during the Gedong festival at the Ganden Sumtsenling Monastery in Shangri-La, southwestern China's Yunnan Province, on Jan. 5, 2016. (Johannes Eisele/AFP via Getty Images)
US-China Relations

The State Department voiced concerns on Jan. 13 over the Chinese regime’s demolition of Buddha statues and other actions against Tibetan Buddhists.

The statement comes days after reports that a 30-foot-tall Buddha statue was destroyed in western China, marking the second being targeted in recent weeks. Last December, monks and Tibetans living nearby were forced to witness a 99-foot-tall bronze statue they revered being torn down.

“We are very troubled by reports of escalating PRC actions against Tibetan Buddhists, including authorities destroying Buddha statues, removing prayer wheels, and burning prayer flags,” said the State Department’s Office of International Religious Freedom in a statement on Jan. 13.

The committee urged the regime to “respect the right of Tibetans to practice their beliefs freely.”

Over the years, the communist regime has been accused of suppressing Tibetan religion and culture.

In the Garzê region of western Sichuan Province, where a significant number of Tibetans live, local authorities reportedly demolished another Buddha statue and a three-story temple that housed it, Radio Free Asia reported on Jan. 10, citing commercial satellite imagery.

The Tibetan government-in-exile, formally known as the Tibetan Central Administration, said that the Tibetans who objected to the demolition were beaten and arrested, citing unnamed sources.

The move comes after local officials dismantled a 99-foot-tall Buddha statue, destroying 45 prayer wheels that monks use to express their sincere devotion to buddhas, and removing and burning down prayer flags.

Kelsang Gyaltsen, representative of the exiled government in Taiwan, told The Epoch Times in a previous interview that recent actions taken by the communist regime were parts of the campaign to eradicate Tibetan religion and culture from China.

In Tibet, temples have already replaced photos of Tibetans’ spiritual leader, Dalai Lama, with the portraits of the communist party’s leader.

The 14th Dalai Lama fled to India in 1959, after the regime’s troops opened fire to crush an uprising in the Himalayan region.