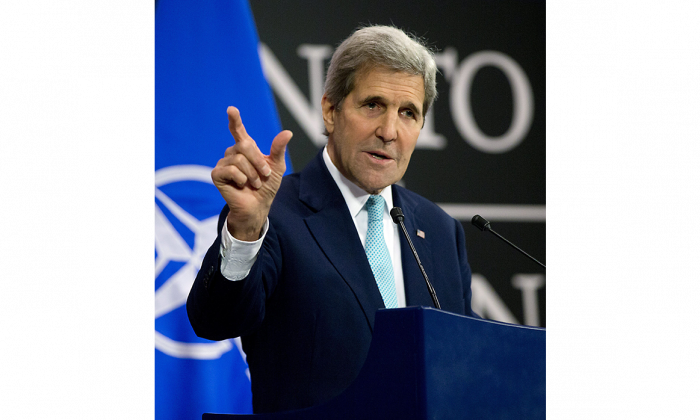 US Expects NATO Allies to Step Up Fight Against ISIS: Kerry

BRUSSELS—U.S. Secretary of State John Kerry has delivered a tough, unambiguous message to NATO members, including Canada, saying the United States expects them to do more in the fight against the Islamic State in Iraq and Syria.

The blunt talk on Wednesday, Dec. 2, was particularly significant for Justin Trudeau’s Liberal government, which has pledged to end the Canadian bombing campaign and refocus the military commitment on training local forces, including police.

Kerry told his 27 other counterparts meeting in Brussels that the international coalition must strike at the core of ISIS in Syria and Iraq and strangle its efforts to set up networks elsewhere.

“I called on every NATO ally to step up its fight against Daesh,” Kerry said, using the Arabic reference for ISIS.

“I was very gratified that a number of allies are already bringing more to this battle—or are planning to increase their contributions.”

“It’s a very important step, we applaud his leadership on it,” he said.

I called on every NATO ally to step up its fight against Daesh.
— U.S. Secretary of State John Kerry

He also praised Germany, which plans to deploy ships and surveillance aircraft to support operations against ISIS.

“It is important for the world to join together in this initiative and we welcome Germany’s efforts.”

Although he didn’t reference the Canadian combat withdrawal, Kerry did give the Liberal government an opening by saying that there are a number of countries willing to step up and the contributions don’t necessarily “have to be troops engaged in kinetic action.”

He said the U.S. has specifically asked for special forces instructors, police trainers, and so-called “enablers,” such as transport and medical facilities.

As a further reminder that Washington isn’t prepared to let allies off the hook, he said the U.S. government will follow up with each country on a military-to-military basis as well as a diplomatic basis “in order to secure additional help.”

On his way into the meeting Tuesday, Foreign Affairs Minister Stephane Dion struck a similar tone, saying Canada can withdraw its CF-18s and do more than just simply providing two percent of the air strikes.

Trudeau promised a beefed-up mission to train local forces in Iraq, over and above the existing 69 special forces instructors working with the Kurdish peshmerga in the north of the country. The government has yet to provide details on what the mission would look like.

Also Wednesday, NATO foreign ministers formally invited the tiny Adriatic nation of Montenegro to join the alliance, despite opposition from Moscow. There was also discussion about fully reactivating the NATO-Russia Council, which, prior to the annexation of Crimea, had been a forum for dialogue between the former Cold War adversaries.

“I will now explore how we can use the council as a tool for political engagement,” Secretary-General Jens Stoltenberg said, noting that the recent downing of a Russian fighter jet by Turkey along with other border incidents makes dialogue important.

Stoltenberg insisted it is not a sign of weakening resolve in the face of the ongoing war in eastern Ukraine, and the embattled country’s foreign minister seemed prepared to accept the shifting position.

Pavlo Klimkin, Ukraine’s Minister for Foreign Affairs, said he was for the moment satisfied that it “would not be a return to business as unusual.”