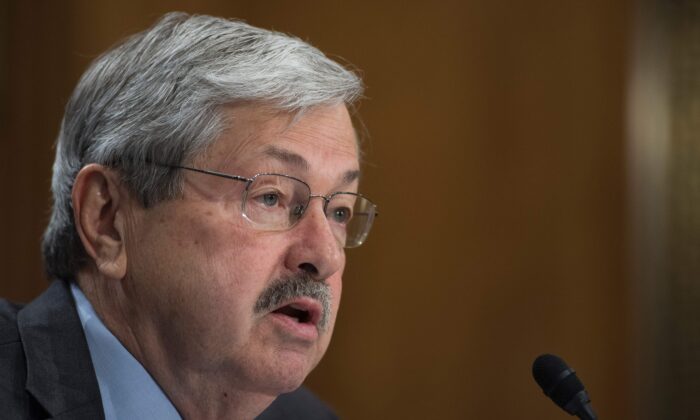 Terry Branstad testifies before the Senate Foreign Relations Committee on his nomination to be ambassador to China, on Capitol Hill on May 2, 2017. (Jim Watson/AFP via Getty Images)
China Human Rights

The U.S. ambassador to China and the European Union (EU) have called out the Chinese communist regime for suppressing basic freedoms on Dec. 10, as the international community commemorated Human Rights Day.

“The PRC cannot expect to earn the international respect it seeks as long as it fails to abide by its commitment to defend individual human rights and freedoms,” said U.S. Ambassador Terry Branstad in a statement.

On this day 71 years ago, the United Nations adopted the Universal Declaration of Human Rights. The Chinese regime is a signatory to the declaration.

Branstad, who has served as ambassador since May 2017, said he has “witnessed the failure of the PRC’s governance model to protect the fundamental freedoms” of its people, “as stipulated in the Declaration and in the PRC’s own laws.”

He said that the U.S. administration remains “gravely concerned with the Chinese government’s unlawful detention of lawyers, journalists, and civil society leaders.”

He also expressed concerns about China’s religious freedom, noting the arrests of people of faith including Christians and Tibetan Buddhists, the shutdown of places of worship, and mistreatment of Muslim minority groups.

Coinciding with Human Rights Day, China held the second day of the global lawyers’ forum in the southern city of Guangzhou, where approximately 800 legal professionals from 57 countries gathered.

Families of detained lawyers and some around 20 international groups in a joint public letter voiced their opposition to the forum’s convening, calling it a “mockery” while pointing out the plight of the human rights lawyers in China.

In 2015, the regime launched a nationwide crackdown on hundreds of human rights lawyers and advocates, a number of whom still remain under detention or surveillance. At least 33 rights lawyers also saw their licenses suspended or revoked for their work, according to the Hong Kong-based nonprofit China Human Rights Lawyers Concern Group.

Beijing-based lawyer Yu Wensheng, who had defended the persecuted faith group Falun Gong and other arrested human rights lawyers, was detained in January 2018 for making critical remarks about the regime, and denied access to legal aid. His wife, Xu Yan, said that Yu was secretly tried on May 9 on the charge of “inciting subversion of state power” without her knowledge.

She also said that around a dozen police surrounded her home in Beijing on Dec. 9 in an attempt to prevent her from leaving.

The EU Delegation to China, in a Dec. 10 statement, named more than 10 Chinese lawyers and activists who were convicted, detained, put under house arrest, or forcibly disappeared.

“All criminal defendants should have fair trial, access to lawyers of their own choosing, to medical assistance and to their family members, and should not be subjected to forced and public confessions, torture or other mistreatment,” the statement read, adding that it “expects China to end” such practices.

Responding to such criticisms on Dec. 10, the Chinese foreign ministry dismissed them as “irresponsible accusations” that are “in disregard of basic facts.”

The EU also highlighted a list of other human rights violations, including the regime’s restrictions on the internet, harassment of foreign correspondents, and restrictions on foreign and domestic non-profit organizations.

Marking the day, the U.S. State Department also called out Beijing for undermining the freedoms of religious and ethnic groups, as well as Hongkongers, who were guaranteed a high degree of political independence when the city reverted to Chinese rule in 1997, as stipulated in the regime’s handover agreement with Britain.

In order for the Chinese regime and other gross human rights violators “to regain moral authority in the eyes of freedom-loving nations, they must rededicate themselves to protecting human rights and fundamental freedoms,” Secretary of State Mike Pompeo said in a statement.

Branstad also pointed out how the Chinese regime readily takes advantage of the freedoms found in the West, while simultaneously denying those same freedoms domestically.

“The irony is not lost on Americans, for example, that Chinese diplomats in the United States readily use U.S. social media to address the American public—enjoying the freedom we hold dear in America—while those social media platforms, as well as our postings in PRC media, are censored here in China.”