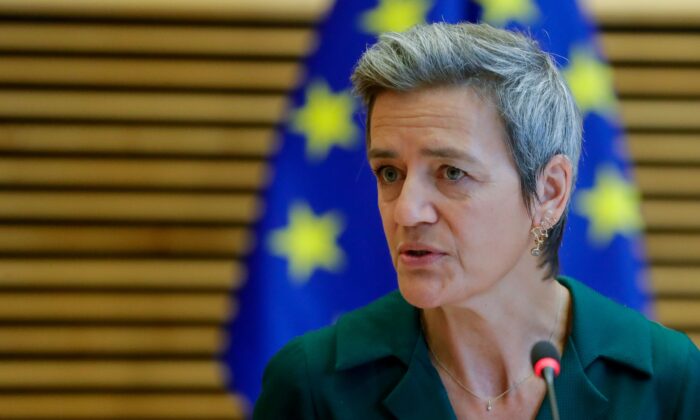 European Commission Vice-President in charge of Europe Fit for the Digital Age, Margrethe Vestager talks at the start of a meeting of the College of Commissioners at the Berlaymont, in Brussels, Belgium on Nov. 10, 2021. (Stephanie Lecocq/Pool via Reuters)
Economy

The United States and the European Union must avoid a subsidy race as they rush to support semiconductor production amid a global chip shortage, EU Competition Commissioner Margrethe Vestager said on Friday.

“We really need to avoid a subsidy race, a race that leaves everyone poorer off,” Vestager said in a speech at the University of Leuven, warning taxpayers would have to fund this.

“In the present circumstances, it may be a temptation too hard to resist for companies to try to play governments out against one another, scanning the landscape to see who will pay more—the risk, of course, is letting taxpayers, whether European or American, pick up the bill and getting maybe very little from that investment,” she continued.