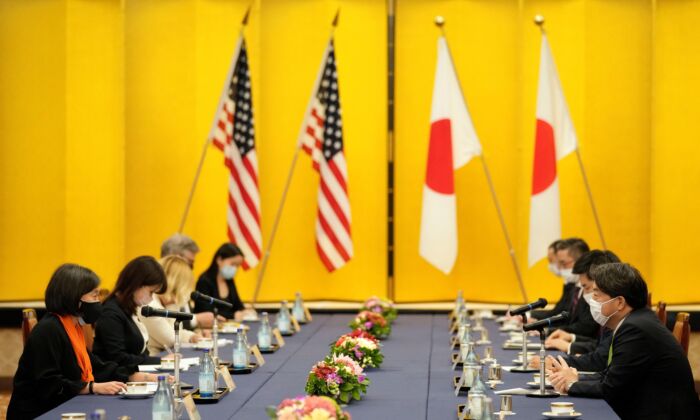 US, EU, Japan to Renew Partnership Against Non-Market Economic Practices

The United States, the European Union, and Japan announced on Nov.17 to renew a trilateral partnership to address challenges posed by the non-market policies and practices of third countries.

The short statement contained no direct reference to China, but the three entities had pledged to curb unfair trade practices and reform the WTO rules.

China, a member of WTO since 2001, has been repeatedly accused of undermining the rules-based multilateral trading system by using heavy subsidies in state-owned enterprises, forcing technology transfer, and stealing intellectual property.

The meeting of the three economic powers is set for Nov.30. Beijing’s economic transgressions also came under the spotlight during the Group of Seven (G-7) leaders’ summit in June. The group was highly critical of the Chinese regime and vowed to counter Beijing’s unfair practices. Trade ministers from G-7 countries also voiced concerns about market-distorting practices, including “those that lead to severe excess capacity, a lack of transparency regarding the state’s role in the economy and the role of state enterprises in unfair subsidization, and forced technology transfer.”

China’s forced technology transfer and theft of intellectual property have long concerned U.S. administrations, particularly th. As a condition of market access, the Chinese regime has required foreign firms to enter into joint ventures with domestic companies and share their trade secrets in the process. According to a 2017 report (pdf), intellectual property theft costs the United States an estimated $225 billion to $600 billion a year, with the principal source of theft being China.

The announcement comes days after the first virtual meeting between U.S. President Joe Biden and Chinese leader Xi Jinping. According to a statement from the White House, Biden made clear the need to protect the U.S. workers and industries from China’s “unfair trade and economic practices” during the three-and-half-hour conference on the evening of Nov.15.

Over the years, China has poured billions in subsidies to critical sectors such as steel, solar energy, and agriculture, U.S. Trade Representative Katherine Tai said in an Oct. 4 speech. These Chinese products have been dumped on the global market at a price that American companies struggle to compete with, shuttering many U.S. factories in the process.

In a meeting on Wednesday in Tokyo, Tai and Japanese Minister of Foreign Affairs Hayashi Yoshimasa discussed “the challenges from, and potential approaches to address, China’s non-market actions and other policies that threaten the stability and prosperity of the global trading system and for our workers,” according to a separate readout.

The United States and Japan are set to begin new talks to address concerns over U.S. “Section 232” national security tariffs on steel and aluminum and curbing global excess capacity for the metals largely centered in China. The talks follow a U.S. quota deal with the European Union to allow around 4 million tons of EU-produced steel duty-free into the United States annually.