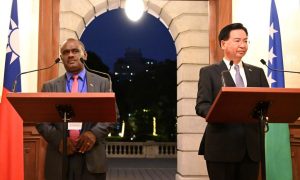 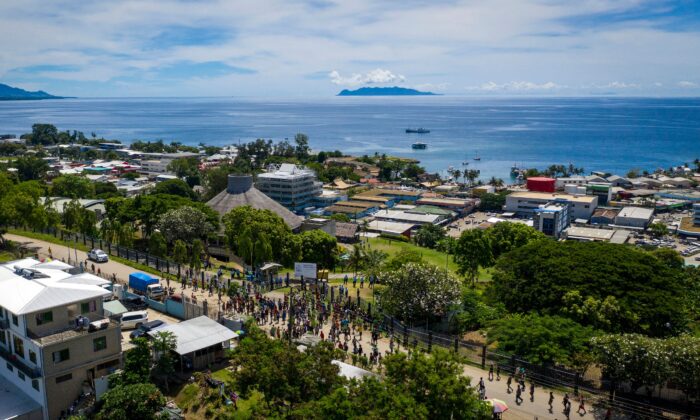 US Establishes Foothold in Solomons as Chinese Interests Expand

SYDNEY—The premier of Malaita province in the Solomon Islands says the United States and its regional allies have pledged to develop a deep-sea port and will be invited to patrol its territory, creating a beachhead against increased Chinese investment.

The apparent tie-up gives western nations a stronger presence in the South Pacific archipelago in the aftermath of the recent decision by the Solomons to sever ties with Taiwan in favor of Beijing.

The diplomatic switch has coincided with an investment push from Chinese companies, including a proposed $825 million gold mine and infrastructure development on the island of Guadalcanal led by state-owned China State Railway Group.

Malaita Premier Daniel Suidani told Reuters the United States would develop a port and supporting infrastructure at Bina Harbour, on the west of the island.

He said the province did not recognize the change in ties to Beijing, and he wanted the United States and its regional allies, including Australia, to push back against any unauthorized development or fishing in its waters.

“We’ve asked the U.S. and Australia to be part of Malaita security so they can look after the province from Chinese developers,” Suidani told Reuters in a phone interview.

About one-quarter of Solomons’ population, which is just over 650,000, lives in Malaita, according to the country’s statistics office, making it one of the main geographic and political power bases in the country.

The province has emerged as an important ally to Washington as the rest of the archipelago starts to work more closely with Beijing.

“China has different values to the Solomon Islands—this is a Christian province, a democratic one,” Suidani said.

The size of the development and monetary contribution required is still being worked out, he said.

“China has no objections to the development of a normal bilateral relationship and cooperation among the relevant countries, as long as the cooperation can be beneficial to regional peace and development,” the Ministry said in a statement to Reuters.

The office of the U.S. Ambassador to Papua New Guinea (PNG), Solomon Islands and Vanuatu said in a statement Malaita and the Solomons would benefit from U.S. support for transportation investment.

Australia’s Department of Foreign Affairs and Trade said it was evaluating transport infrastructure projects in the Solomons.

“Bina Harbour is one of the proposed sites within the (initiative) identified for upgraded passenger and commercial ferry services between the provinces of Guadalcanal, Malaita and Western Province,” the department said.

The United States, which fought some of the fiercest battles of World War Two against the Japanese in the Solomons, said it was reassessing its aid to country after the September switch in diplomatic recognition to Beijing.

It has instead focused its diplomatic attention on Malaita, with representatives of the U.S. government’s development agency, USAID, part of a contingent which visited Malaita in August, the U.S. ambassador’s office previously told Reuters.

After the switch, convoys of trucks and protesters took to the streets of the provincial capital of Auki holding banners such as “Malaita for Democracy.”

Malaita is also conducting a process to consider pursuing self-determination, a popular and long-held position by many in the province who want greater autonomy from the capital.

The United States has increased its engagement in the Solomons following the switch, which includes a decision to re-establish a presence there by the U.S. government’s volunteer Peace Corps after an almost 20-year absence.