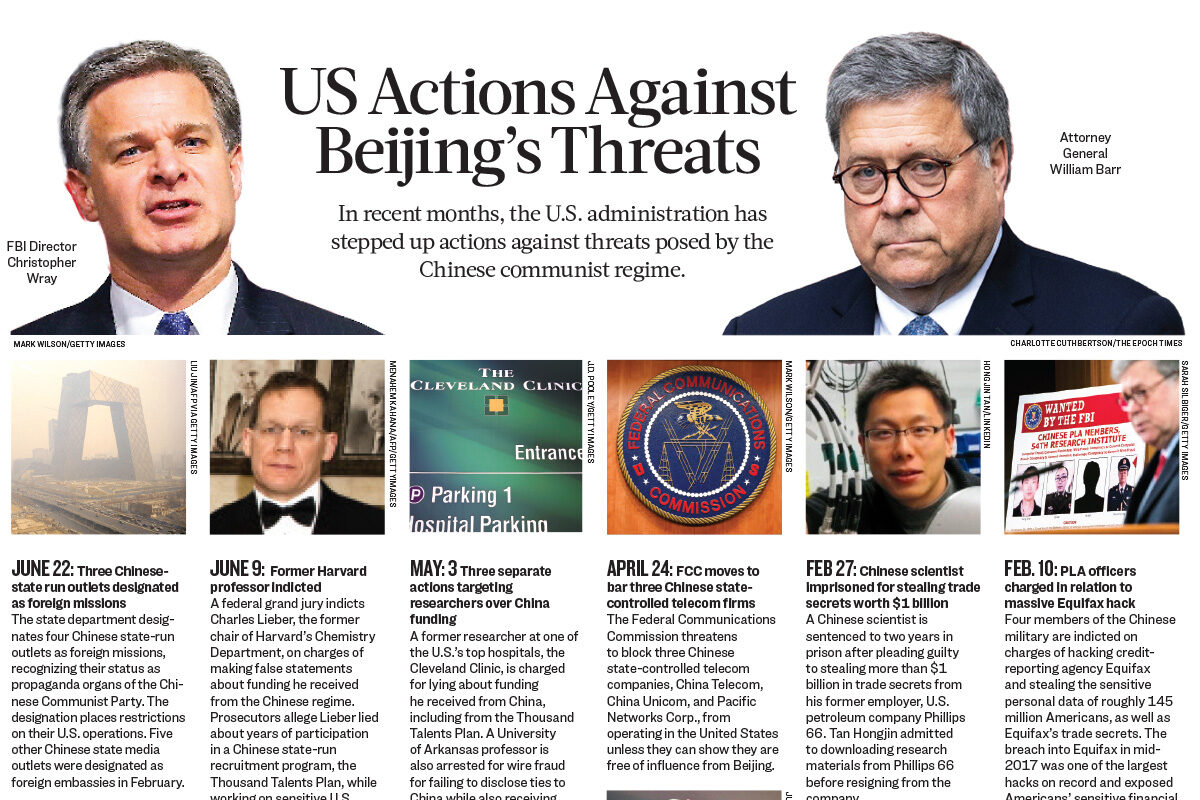 The United States is responding to the Chinese Communist Party’s (CCP) “unrestricted warfare” strategy by ratcheting up its war of words and escalating its countermeasures—a more hard-hitting approach to a threat that previous administrations failed to fully recognize, according to experts.

Top U.S. officials, as well as politicians from both sides of the political aisle, have expressed concern about China’s increasingly aggressive and hostile stance toward the United States. FBI Director Christopher Wray said recently that no country presents such a danger to America’s innovation, economic security, and democratic ideas than the Chinese regime.

National security adviser Robert O’Brien, meanwhile, recently said the United States will no longer be passive in dealing with China.

Aside from the rhetoric, U.S. counteractions have also ramped up. Wray revealed last week that the bureau currently has more than 2,000 active investigations that trace back to the CCP, marking a roughly 1,300 percent increase in economic espionage probes with links to the Chinese regime. He said the bureau opens “a new counterintelligence investigation that ties back to China every 10 hours.”

The recent public proclamations from both the administration and members of Congress “reflect a frustration with China’s aggressive theft of U.S. innovation and technology,” says Nicholas Eftimiades, a former senior U.S. intelligence official and author of the book, “Chinese Intelligence Operations.”

“The Chinese communist government has never been friends with the U.S.,” he said. “It is only now, some American politicians are realizing it.”

Since 2018, the U.S. administration’s efforts to abate China’s espionage, commercial espionage, and intellectual property theft has been increasing, according to Eftimiades. If the United States backs up its current rhetoric with actions, allies will also move more aggressively to counter China, thereby increasing global pressure on the CCP and Chinese leader Xi Jinping to comply with the established global rule of law, he said.

Previous administrations and members of Congress believed China would liberalize as it gained wealth. Eftimiades called the story of U.S.–China relations “a very sad tale of American arrogance, ignorance, political greed, and corruption.”

“Chinese and American companies were happy to donate and offer business opportunities to U.S. politicians who shared those beliefs,” he said. “The result was a massive expansion of China’s military, trillions lost in U.S. intellectual property, a threat to the world rule of law, and rich American companies and politicians.

In February, the FBI was already conducting roughly 1,000 investigations into China’s attempted theft of trade secrets, just one of many fronts in the communist regime’s wide-ranging campaign against the United States. Every FBI field office at the time was working on trade-secret theft cases involving China, with potential victims spanning almost every sector and industry.

According to a review of DOJ press releases, the department has brought more indictments related to Chinese infiltration since 2019 than during the entire eight years of the Obama administration.

John R. Mills, former director of cybersecurity policy, strategy, and international affairs at the Office of the Secretary of Defense, said the uptick in FBI probes is significant and is due to a “massive reprioritization” of the bureau’s assets and resources.

“The way FBI, law enforcement, and national security investigations work is they just have to be told what the priority is and they will pivot and reprioritize,” Mills told The Epoch Times. “That’s what your seeing, a massive reprioritization of FBI activities here. … It has a huge effect.”

While the bureau has increased its efforts, some say it won’t be enough to fully deal with the CCP threat until a national strategy and an all-of-society approach is utilized.

“The FBI is attempting to meet an impossible challenge,” Eftimiades said. “There are thousands of PRC intelligence officers operating in the U.S. The FBI cannot mitigate China’s clandestine collection activities.”

The effort to fight the Chinese communist infiltration was launched in November 2018 by then-Attorney General Jeff Sessions shortly before he submitted his resignation—the campaign was formally known as the China Initiative.

Early in June, Charles Lieber, the former chair of Harvard University’s chemistry department, was indicted on charges of making false statements about funding he received from the Chinese regime, the DOJ said.

Lieber was arrested in January for allegedly lying about his participation in the Chinese state-backed Thousand Talents recruitment program. A federal grand jury on June 9 indicted him on two counts of making false statements to federal authorities.

And in one of the latest cases, 41-year-old Hao Zhang was found guilty on June 26 of economic espionage, theft of trade secrets, and conspiring to commit both offenses, according to the DOJ. Between 2010 to 2015, Zhang attempted to steal trade secrets from two companies “for the benefit of the People’s Republic of China.”

Sessions directed the DOJ to focus on a range of priorities related to Chinese infiltration, including identifying key trade-secret theft cases, developing a strategy to go after non-traditional intelligence collectors being co-opted by the communist regime, and to applying the Foreign Agents Registration Act against unregistered agents advancing the Chinese regime’s interests.

U.S. officials are right to characterize the CCP as the biggest threat to the United States, according to Eftimiades.

He described how over the past two decades, the CCP downed a U.S. military reconnaissance aircraft, used lasers to blind U.S. pilots, disrupted U.S. satellites, threatened to stop U.S. companies from exporting antibiotics made in China, and stole trillions in U.S. intellectual property.

The Chinese Communist Party also launched an offensive to redirect blame and responsibility over how it dealt with the CCP virus outbreak in China. Aside from the United States, other countries around the globe have also expressed anger and frustration over the CCP’s botched handling and far-reaching coverup of the CCP virus, also known as the novel coronavirus.

Yang Jianli, a Chinese dissident and son of a former Communist Party leader who now heads the Citizen Power Initiatives for China, a pro-democracy NGO in the United States, said people around the world are now getting a better understanding of the CCP.

“The CCP has for years claimed to be a responsible member of the global community but showed once again its true colors in this pandemic,” he told The Epoch Times. “Justice demands it be held morally culpable for its dangerous and callous behavior.”

Yang said that while others are tied up with the pandemic and its economic consequences, the CCP will become even more aggressive in its disinformation campaign of “mask diplomacy.” He said that “this will further contribute to feed the global distrust and resentment.”

In a statement, FCC Chairman Ajit Pai noted that both companies have “close ties to the Chinese Communist Party and China’s military apparatus” and that they would both be “broadly subject to Chinese law, which obligates them to cooperate with the country’s intelligence services.”