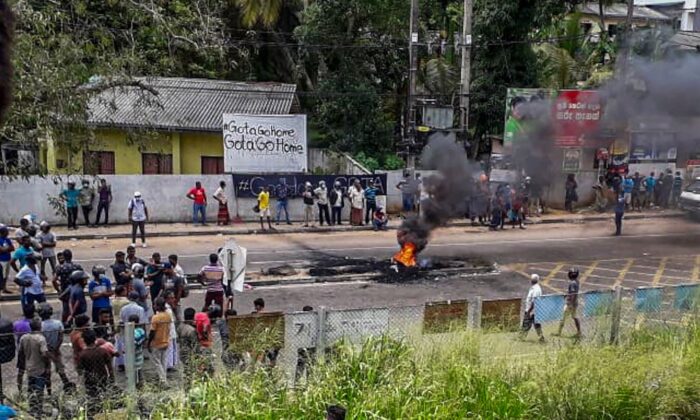 Protesters block a road in Rambukkana on April 19, 2022. Sri Lanka police shot dead a protester and wounded 24 others on April 19 in the first fatal clash with residents demonstrating against the government over the island nation's crippling economic crisis. (AFP via Getty Images)
Asia & Pacific

The U.S. ambassador to Sri Lanka has called for a “full and transparent investigation” into the police shooting of unarmed protesters in the central town of Rambukkana, which killed at least one person.

One person was killed and 24 others, including eight police officers, were injured after clashes broke out between protesters and police in Rambukkana on April 19, local media Adaderana reported.

U.S. Ambassador to Sri Lanka Julie Chung said she condemned violence against anyone in the crisis-hit country and called for restraint from all sides.

“I am deeply saddened by the horrible news coming out of Rambukkana. I condemn any violence—whether against protesters or police—and call for restraint [and] calm from all sides. A full, transparent investigation is essential [and] the people’s right to peaceful protest must be upheld,” she said in a tweet.

According to local reports, protesters blocked all roads to Rambukkana for more than 15 hours to demand that authorities supply fuel at previous rates. Fuel prices in Sri Lanka have sharply increased due to the government’s failure to pay for imports.

While police fired tear gas to disperse protesters, the situation only deteriorated, resulting in police firing live ammunition on protesters.

A police curfew was imposed in Rambukkana effective immediately.

Hanaa Singer-Hamdy, the U.N. resident coordinator in Sri Lanka, expressed “deep concern” about the situation in Rambukkana, saying that “violence by any party involved” impedes the rights of peaceful protesters.

“Restricting use of force to the minimum extent necessary is vital to protect citizens and their right to exercise fundamental freedoms,” she wrote in a tweet.

Thousands of Sri Lankans have taken to the streets to protest the government’s mishandling of the country’s worst economic crisis in decades, calling for the resignation of President Gotabaya Rajapaksa and all his cabinet members.

Prime Minister Mahinda Rajapaksa had offered to meet with protesters camped outside the presidential office, but his invitation was reportedly turned down.

Protesters at the Galle Face area—which has been renamed “Gota Go Gama”—told Rajapaksa in a letter that discussions will only happen after their demand is fulfilled for the president and all his cabinet members to quit entirely, Sri Lanka’s Daily Mirror reported.

Sri Lanka is on the verge of bankruptcy, with its foreign exchange reserves plummeting by 70 percent in the past two years and $25 billion in foreign debt maturing in five years. The government said on April 12 that it was suspending foreign debt repayments.

Sri Lanka’s finance ministry said on April 19 that the International Monetary Fund (IMF) would consider providing financial assistance to the island nation under the Rapid Financing Instrument, despite it being “outside of the standard circumstances.”

“The IMF has subsequently informed [Finance Minister Ali Sabry] that India had also made representations on behalf of Sri Lanka,” the ministry said.