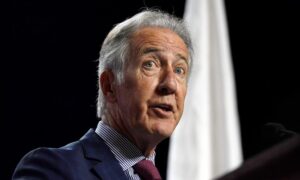 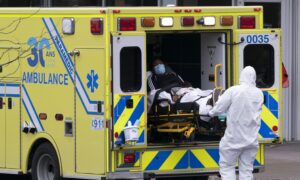 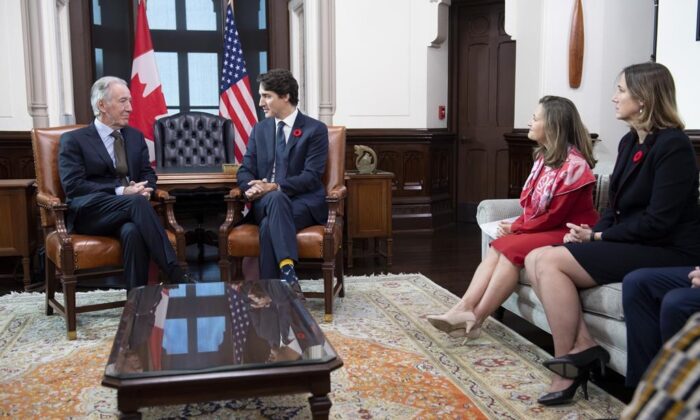 Canada's Minister of Foreign Affairs Chrystia Freeland (second from right), and Acting Ambassador of Canada to the United States of America Kirsten Hillman (right), look on as Prime Minister Justin Trudeau speaks with Richard Neal, Chairman of the Committee on Ways and Means of the United States House of Representatives on Parliament Hill in Ottawa, on Nov. 6, 2019. (The Canadian Press/Adrian Wyld)
Canada

WASHINGTON—The mutual understanding, diplomatic ties and personal relationships that were forged in the fires of the North American trade talks of 2018 have been essential to the success of a shared bilateral effort to manage the COVID-19 crisis, says Canada’s ambassador to the United States.

Kirsten Hillman, who was at the centre of the negotiations that ultimately produced the U.S.–Mexico–Canada Agreement, said the resulting bond between the two countries helped foster a quick and orderly mutual ban on non-essential travel over the shared border.

In turn, that unprecedented agreement—which took effect a month ago at the height of a fraught and frantic international effort to slam the door on the novel coronavirus—has been setting the tone ever since for ongoing talks to keep supply chains intact, facilitate imports of protective medical gear and ease the cross−border commutes of vital medical personnel.

“I believe wholeheartedly that the relationships that we built over the last couple of years in negotiating the NAFTA—and not just with trade officials, but with the entire U.S. administration and representatives across this country, so the personal relationships and lines of communication that have been developed by me and by others—have been essential in this moment,” Hillman said in an interview.

“The very much raised awareness on both sides of the border as to the degree to which the Canada-U.S. partnership is essential for our economic security, economic well-being but also, frankly, energy security, and now supply chains and health products, probably was important groundwork to allow us to move pretty quickly into a very collaborative tone with the U.S.”

Formerly Canada’s deputy envoy in Washington under predecessor David MacNaughton, Hillman had been serving as acting ambassador since last summer before her battlefield promotion finally came through last month.

The border deal, which keeps trade and commerce flowing while shutting down non-essential travel, wasn’t even the hardest part of the pandemic response, she suggested. That came in the days prior, during the enormous logistical challenge of getting citizens home from around the world as international travel was grinding to a halt.

Since then, the two countries have been in close collaboration on a variety of related issues, including ongoing shared technical and medical research, as well as the challenge of keeping supply chains intact. But there have been pressure points and disagreements, too.

Canada and Mexico were eventually exempted, and the latest version of the Federal Emergency Management Agency’s rules for redirecting personal protective equipment (PPE), which took effect earlier this week, contains remarkably multilateral language that wasn’t in the original order.

“Negative impacts to workers, including a lack of PPE, in these and other critical sectors in Canada and Mexico may cause significant interruptions to the corresponding supply chains in the United States, and in turn, may disrupt the large flow of cross-border trade with our neighbours,” the document reads.

Then there was the prospect of U.S. soldiers operating near the Canadian border—a non-starter of an idea that Hillman said probably began as a stressed-out call for help from someone oblivious to the diplomatic consequences.

Just like in Canada, U.S. military forces are summoned to assist with all manner of civilian emergencies, she said—often at times when officials are desperately trying to keep their heads above water and process a constant barrage of new and disturbing intelligence.

“Every day, there was more information coming in about the virus and how it was affecting communities, and there was there was just a lot of around-the-clock work at that time,” Hillman said.

“My guess is that … this idea was put forward as something that could assist, without really perhaps appreciating that from the Canadian side, we would see that as really an unnecessary action to take.”

As the pandemic continues to evolve, both Canada and the U.S. are keeping a close watch on another vital element of the selective travel restrictions: the continued movement of health-care workers who live in Canada but work on the front lines across the border.

The focus, Hillman said, is on making sure that those workers are well-protected—not only from the virus, but also from any effort to limit their mobility out of a misplaced fear they could bring it home with them.

“Whether it’s Michigan or upstate New York or elsewhere, those are the people who reach out to me who say, ’These workers are vital—they’re very, very important to us—is there anything we can do to make sure that Canadians feel that we have the necessary protections in place for these workers so that they are not jeopardizing the health and safety of their communities,’” she said.

“Everyone’s acutely aware of the essential nature of this partnership for communities on both sides of the border—and there are American workers travelling to Canada as well—but also the desire to be as co-operative and collaborative as possible, within the limits of ensuring public health safety.”