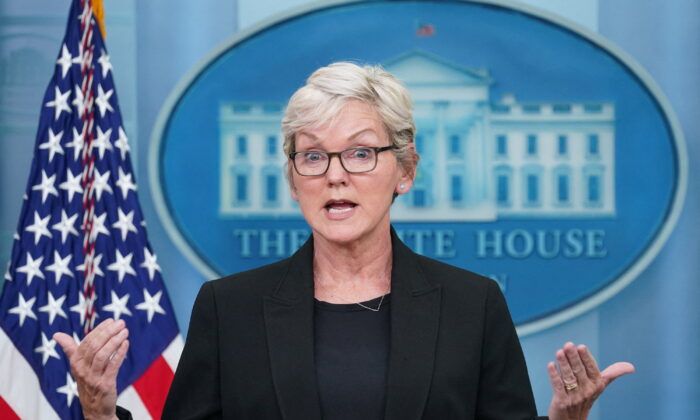 U.S. Secretary of Energy Jennifer Granholm said the Biden administration could use the Defense Production Act to handle dealing with high gas prices, although it’s not clear exactly how.

“President [Joe] Biden, like all other leaders around the world, are grappling with this for their citizens,” Granholm said Wednesday during a White House press briefing. “And the president is doing everything he can to reduce prices for American families.”

Several days before that, Granholm suggested Biden might take dramatic action to deal with the historically high prices during an appearance on CNN’s “State of the Union.” She noted that he could use executive orders, including the Defense Production Act to direct resources.

“Let’s just say the president is prepared to use all of his authorities to do what he can to increase supply,” Granholm said in her appearance Sunday on “State of the Union” about using the Act.

Granholm, like other Biden administration officials, claimed the spike was because of the Ukraine-Russia war, embargoes on Russian oil, and general inflation.

“So we know that the war in Ukraine, having driven up the price of fuel … we’ve got to make up for the million barrels per day that we’ve lost,” Granholm added to reporters Wednesday. “We will have a demand problem when China opens up, and there will be additional upward pressure on supply.”

Republicans have said that the high prices are largely because of the Biden administration’s policies targeting the oil industry, including suspending new oil drilling leases on federal lands, ending federal subsidies for fossil fuels, killing off the Keystone XL pipeline, and generally creating a climate that is unfavorable to the oil industry while promoting electric vehicles.

Granholm, the former Democrat governor of Michigan, previously owned millions of dollars in stock in an electric bus maker before she sold it off in early 2021, according to White House officials. In recent days, meanwhile, Granholm suggested to Americans that they should purchase an electric vehicle if they’re sick of $5 per gallon prices.

“If you filled up your EV [electric vehicle] and you filled up your gas tank with gasoline, you would save $60 per fill-up by going electric rather than using gasoline, but it’s a very compelling case,” she said in a clip posted by Republicans on social media on June 14. “But again, we want to bring down the price at the point of purchase.”