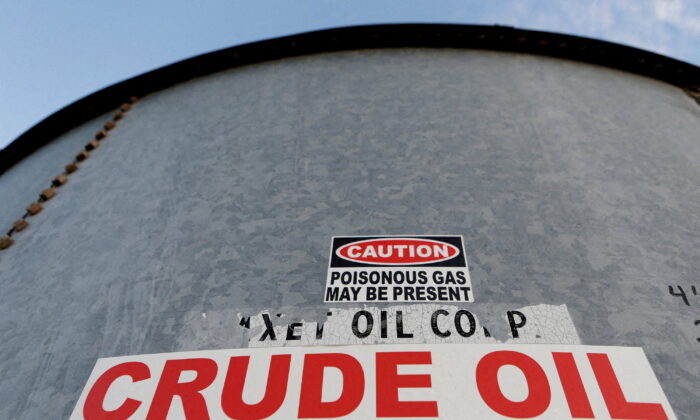 Sticker reads "crude oil" on the side of a storage tank in the Permian Basin in Mentone, Loving County, Texas, on Nov. 22, 2019. (Reuters/Angus Mordant)
Energy

US Emergency Oil Reserves Fall to Lowest Levels Since 1984

The U.S. Strategic Petroleum Reserve (SPR) has declined to its lowest level in 38 years, according to the latest data from the Energy Information Administration (EIA).

In the week ended Sept. 9, the nation’s emergency crude stockpile totaled 434.05 million barrels. It hasn’t been that low since early November 1984, when the SPR hovered at around 436 million barrels.

In March, President Joe Biden unveiled a plan to release 1 million barrels per day (bpd) from the SPR over six months to lower energy prices. While the current initiative is scheduled to end next month, the White House is weighing its options, including extending the program beyond October and possibly refilling reserves.

Last week, Energy Secretary Jennifer Granholm told Reuters that the White House is considering a plan to keep tapping into the federal government’s reserves. But market analysts note that the administration is unlikely to do so if West Texas Intermediate (WTI) futures, the U.S. benchmark, maintain their downward trend.

While the current initiative is scheduled to end in October, the White House is considering extending the program to sustain the trend toward lower oil and gasoline prices, Granholm said.

Bloomberg reported that the Oval Office is thinking about restocking the SPR when crude oil falls below $80 per barrel. But market experts suggest that this news established a floor between $80 and $85 for U.S. crude prices.

Energy analysts warn that this move is a signal that the administration thinks its releases will “backfire.”

“The Biden administration admitting that they have to refill the reserve is an admission that their policy of using the Strategic Petroleum Reserve for political purposes will backfire,” Phil Flynn, an analyst and author of The Energy Report, wrote on Sept. 14. “The administration is now acknowledging that they have to be prepared for a winter price spike, and that means that surging inflation may not be over at the gas tank or when you pay your heating bills.”

Warren Patterson, head of commodities strategy at ING, explained in a note that this measure could “support prices at lower levels” to spur domestic output.

“In addition to refilling storage, which has been heavily tapped into this year, the move would reportedly also be taken to try to support prices at lower levels, so as to try to ensure that we continue to see growth in U.S. oil output,” he said. “U.S. SPR releases have helped out the market significantly this year; however, these releases are set to come to an end in October.”

When Biden took office, the SPR stood at approximately 638 million barrels. Industry observers contend that figure could have been higher and Biden might have had more room to inject even larger sums into the energy markets. In March 2020, Democrats thwarted then-President Donald Trump’s efforts to buy nearly 80 million barrels of crude when it was trading in the $20–$30 range.

Moreover, in a March 19, 2020, call with reporters, then-Energy Secretary Dan Brouillette argued that the proposal would send “signals to other investors that they have extreme confidence in their operations.” But Senate Majority Leader Chuck Schumer (D-N.Y.) rejected the idea, calling it a bailout for the oil sector.

October WTI futures are at about $85 a barrel on the New York Mercantile Exchange. Brent, the international benchmark for oil prices, topped $90 per barrel on London’s ICE Futures exchange.

What Oil Investors Are Watching

In addition to the latest SPR news and developments, energy markets are paying attention to the International Energy Agency’s (IEA) recent demand outlook.

According to the report, researchers anticipate that global crude year-over-year demand growth would “grind to a halt” in the fourth quarter, and supply will outpace demand through the second quarter of next year. It trimmed its 2022 demand growth estimate by 100,000 barrels, to 2 million bpd.

The IEA listed a slowdown in countries belonging to the Organization for Economic Co-Operation and Development (OECD) and persistent weakness in the Chinese economy.

“Slightly higher OPEC+ volumes and slower demand could see a much-needed global stock build during the rest of this year and into the first half of 2023,” the report stated. “The global economy is on the cusp of a recession.”

James Mick, managing director and senior portfolio manager with TortoiseEcofin, thinks that China’s demand for crude oil in 2022 might contract for the first time since 2002.

The Organization of the Petroleum Exporting Countries (OPEC) stuck with its demand growth forecast for 2022 and 2023. The cartel projected on Sept. 13 that demand would rise by 3.1 million bpd this year and 2.7 million bpd next year, unchanged from its previous estimate.

“Oil demand in 2023 is expected to be supported by a still-solid economic performance in major consuming countries, as well as potential improvements in COVID-19 restrictions and reduced geopolitical uncertainties,” OPEC wrote in its update (pdf).

Overall, it forecasts global oil consumption to average 102.73 million bpd next year, slightly above the pre-pandemic level in 2019.