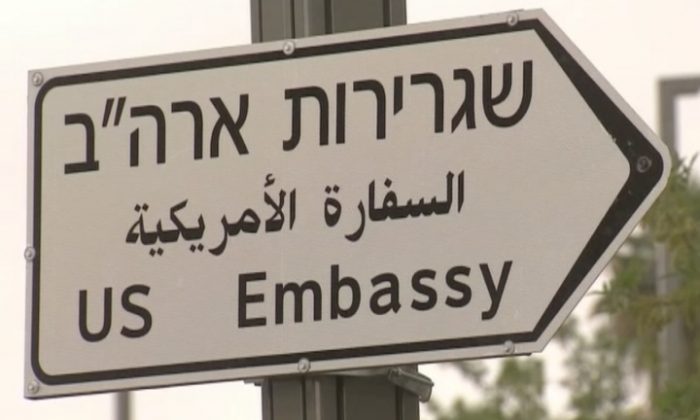 Road signs marking the U.S. Embassy in Jerusalem are starting to be put up ahead of next week's opening of the disputed embassy. (Reuters/Screenshot)
Middle East

‘US Embassy’ Road Signs Go up in Jerusalem

U.S. Embassy road signs went up in Jerusalem on Monday, May 7, ahead of next week’s opening of the mission, in accordance with President Donald Trump’s recognition of the city as Israel’s capital.

Workmen installed the black-and-white signs in English, Hebrew, and Arabic, along roads leading to a U.S. consulate building in south Jerusalem that will be remodeled as the embassy when it is formally relocated from Tel Aviv on May 14.

“This is not a dream. It is reality. I am proud and moved to have hung this morning the first new signs that were prepared for the U.S. Embassy,” Jerusalem Mayor Nir Barkat wrote on Twitter.

Trump announced the move in December, saying he was making good on U.S. legislation and presidential pledges, dating back decades, to back Israel’s designation of Jerusalem as its capital.

Trump said his administration has a peace proposal in the works, and recognizing Jerusalem as the capital of America’s closest ally had “taken Jerusalem, the toughest part of the negotiation, off the table.”

There has long been pressure from pro-Israel politicians in Washington to move the embassy to Jerusalem, and Trump made it a signature promise of his 2016 election campaign.

The decision was popular with many conservative and evangelical Christians who voted for Trump and Vice President Mike Pence, many of whom support political recognition of Israel’s claim to the city. Trump acted under a 1995 law that requires the United States to move its embassy to Jerusalem, but to which other presidents since then—Bill Clinton, George W. Bush, and Barack Obama—consistently signed waivers against.

The Trump administration has left the diplomatic door open for a possible Palestinian presence in Jerusalem.

Other world powers have not followed Trump’s move, sidestepping one of the thorniest disputes between Israel and the Palestinians. Israel’s prime minister, Benjamin Netanyahu, celebrated Trump’s decision, and Guatemala said it would relocate its embassy to Jerusalem on May 16, two days after the American move.

Israel captured East Jerusalem from Jordanian control in the 1967 Middle East war and annexed it in a move not recognized internationally. The last round of peace talks on a Palestinian state in the West Bank and Gaza Strip collapsed in 2014.

“By recognizing Jerusalem as the capital of Israel and the seat of its government, we’re recognizing reality,” U.S. Secretary of State Mike Pompeo said during a visit to Israel last week.

“I also stress, as President Trump has said in December, the boundaries of Israeli sovereignty in Jerusalem remain subject to negotiations between the parties, and we remain committed to achieving a lasting and comprehensive peace that offers a brighter future for both Israel and the Palestinians.”